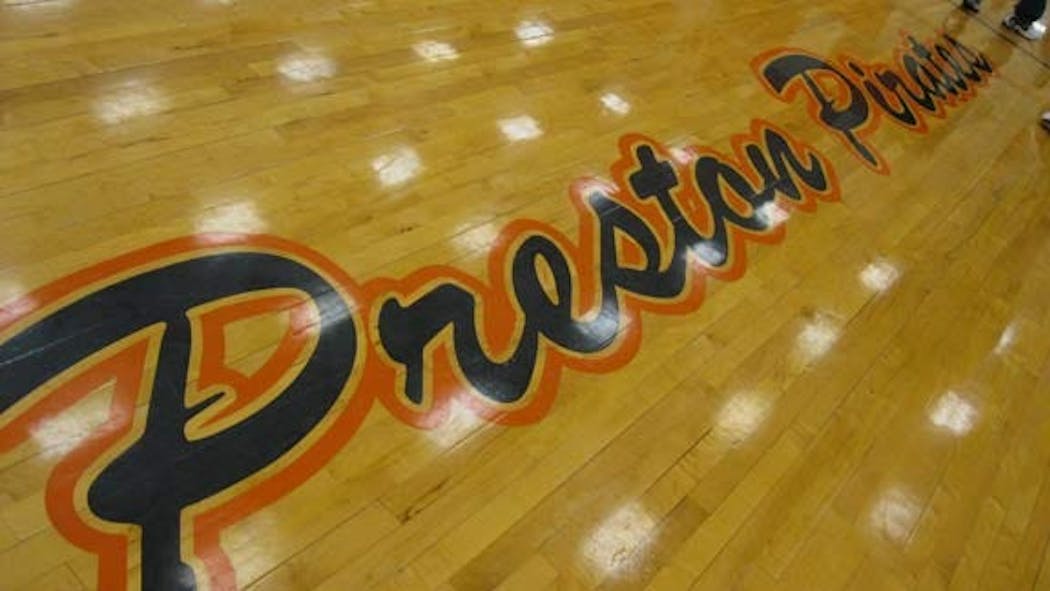 Wesley Coburn
Oklahoma Sports Student Mojo
OKMULGEE, Oklahoma--Preston won the 2011 edition of the Creek Nation Okmulgee County Tournament last week for the second year in a row, improving to 13-4 on the season.

The Pirates, who entered tournament play as the No. 1 seed, advanced almost as soon as the brackets were decided.

The Pirates had a 34-7 lead over the Schulter Bulldogs after the first quarter Tuesday night and by halftime they led 60-9. By the end of the third they held a 79-17 advantage, and purposely stayed under 100 in the 92-29 annihilation.

Every Preston player scored and Phillip Olivera led the scoring for the Pitates with 14 points. Eric Love added 12 while Chance LeBlanc scored 10 and Tyler Mitchell had nine.

After a snow delay, the semifinal game against Okmulgee took place Friday night. Preston led 17-6 after a first quarter that saw security escort fans out of the building.

Okmulgee came back in the second quarter and the Bulldogs only trailed 22-17 at halftime. Preston used an 8-0 run to build a comfortable 48-20 third quarter lead, and the final score was 74-40. Willie Huffman had a team-high 19 points, LeBlanc scored 18, Brian Mayfield had eight and Mitchell and Kalon Watkins added six points each.

The opponents in the championship game would be Henryetta, who the Pirates beat 77-60 at home on November 30.

The Knights were surprisingly ahead 10-6 after one quarter but Preston regained a 21-20 halftime edge.

Preston used a run of eight straight points to enjoy a 32-27 advantage with three quarters played but with three minutes left in the game, Henryetta squad was only down 36-32.

In the end, the Pirates used their size to defeat Henryetta 52-38, winning back-to-back county tournaments.

“They’re tall, strong, and they shoot the ball well,” Henryetta coach Jerry Ward said of Preston, who beat his team for the fourth time in a row.

Up next on the schedule, the Pirates and Lady Pirates (5-8) will play in Henryetta on Tuesday night, girls tip off at 6:30 p.m.; boys follow at 8 p.m.