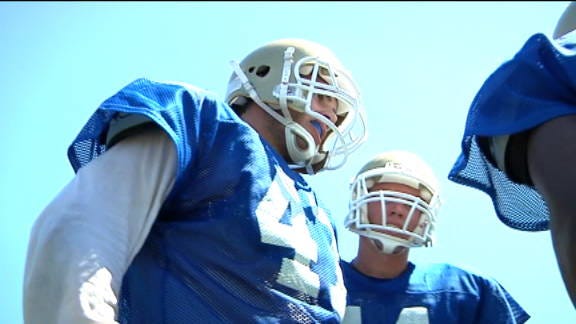 With two weeks left until National Signing Day on Feb. 2, Davis is still undecided on where his future lays.

“Right now, I’m still committed to [Tulsa], but I’ve talked with their coaches and they understand me looking around and taking visits to other places,” Davis said. “They’ve actually kind of encouraged it and been really understanding about looking at other options.”

When former head coach Todd Graham and most of the TU staff left for the Pittsburgh head coaching position, things opened up for the Choctaw senior. In the days following Graham’s departure, Davis has been in contact with several schools, including Kansas State, Texas Tech and Texas A&M.

“When [the TU coaches left], I was going to be looking around,” Davis said. “If [other schools] hadn’t called I would have called them eventually, checking up on some of the old relationships with some of the coaches. Before [TU] hired a new head coach, I wasn’t sure. I’ve only heard good things about Blankenship.”

While being recruited to Tulsa, Davis built a relationship with former defensive line coach Paul Randolph, who left TU in the mass coaching exodus. The relationship with Randolph is one of the reasons why the Panthers are still an option for Davis.

“We’ve been talking just as much as we were when he was at Tulsa,” Davis said. “Right now at Pittsburgh they’re still letting commits make up their minds and see if they like the new coaching staff and see if they want to move around. “

After the visits to Tulsa and Kansas State, the next weekend is wide open and Davis plans on taking visits then as well, trying to make the most informed decision.

“That’s kind of why we’re doing two visits this weekend,” Davis said. “If something did open up it probably wouldn’t be too wise to commit to somewhere you haven’t visited.”