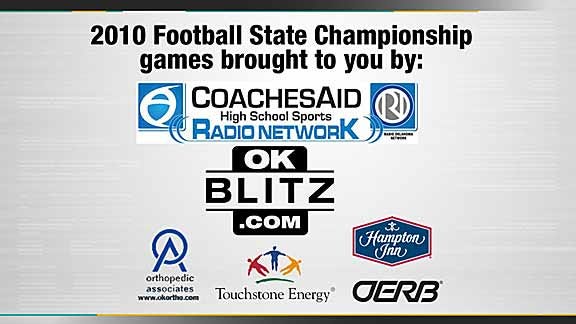 Oklahoma Sports along with CoachesAid.com and theRadio OklahomaNetwork will once again bring you live play-by-play of the football state championship games this weekend.

This weekend Class 3A, 2A and A will take the field at Boone Pickens Stadium to battle it out for the gold ball.

Be sure to tune in to the broadcast live stream on Oklahoma Sports starting at 7:00 p.m. for all the sights and sounds from the state title games.

Last week we brought you coverage of some classic contests in Class 6A where Union beat Jenks 50-47, 5A where Booker T. Washington ran past East Central, as well as an overtime battle in Class 4A where Douglass beat Wagoner.

Below you will find the lineup for this weekend’s broadcasts:

Several Radio Oklahoma Network affiliates from across the state will also be carrying the broadcasts live (we’ll have a complete list later in the week).