Lawton Eisenhower Advances to Round 2 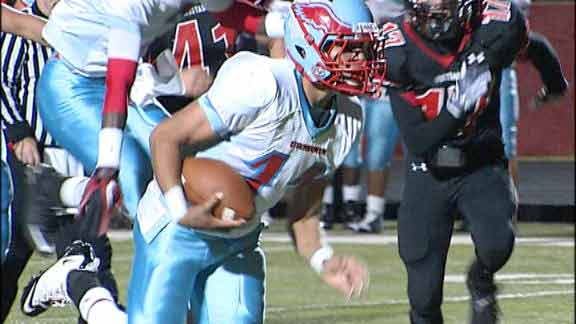 LAWTON, Oklahoma -- The Lawton Eisenhower Eagles (8-3) held on to a late, fourth-quarter lead to beat the Mustang Broncos (7-4) and move onto to the second round of playoffs.

The Eagles had 473 yards on 63 carries in their victory, continuing a perfect 11-0 record and on to face Jenks on the road next Friday.

Lawton Ike got on the board first, when quarterback Adrian McDonald found wide receiver Adrian Woodard for a 7-0 lead. Mustang answered back three minutes later when Bronco quarterback Brandon Taylor connected Jacob Strassle on an eight-yard pass to tie the game.

Taylor and his team took the lead with just over 40 seconds in the first quarter when he punched in a one-yard run.

McDonald tied it up at 14 when he ran in a 30-yard run for Ike. Teammate and running back Louis Durant put up seven more points on a 13-yard run, as the Eagles took a 21-14 lead.

Durant scored another second-quarter touchdown as the Broncos fell behind by 14 points. Mustang’s David Glidden tried to rally his team back on a three-yard pass. He was obviously in pain, limping off the field and to the sidelines to get checked out by trainers.

Lawton Ike opened the second half of the game with a three-yard run by Durant to pull ahead 35-20. The Eagles fumbled on their own 10-yard line, allowing the Broncos to score, narrowing the margin to seven points.

Durant answered back with a 91-yard run to the Mustang two-yard line, finishing it up on the next play to take a 42-28 lead. Mustang fumbled on their own 44-yard line, as the Eagles took the opportunity to score on a 47-yard pass, pulling ahead 42-34 to advance to the second round.

Lawton Eisenhower will travel to Jenks (11-0) to face the Trojans next Friday.

Lawton Eisenhower Advances to Round 2