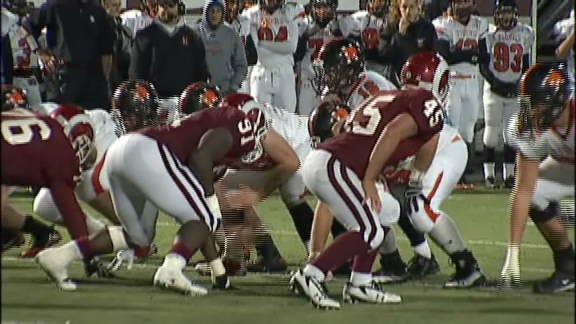 OWASSO, Oklahoma – With the dream season Norman was having, it would only be fitting for them to end the season in thrilling fashion.

Unfortunately for the Tigers, that thrilling fashion didn’t happen to go their way.

The Owasso Rams took down Norman 51-44 in a five-overtime game that was surely among the craziest the state has ever seen.

The teams failed to put up much offense through regulation, heading into the first overtime tied at 16.

Once the extra periods hit, neither defense could stop the opposing offense.

Through the first four overtimes, both teams managed a touchdown and successful extra point conversion on each possession.

Owasso’s Joe Lindsey hauled in a 6-yard touchdown pass to put the Rams up in the fifth overtime, and the PAT made it 51-44. Norman (8-3) was unable to respond for the first time in four possessions.

The Rams (7-4) will now head to Westmoore to take on the Jaguars in the second round Friday at 7:30.