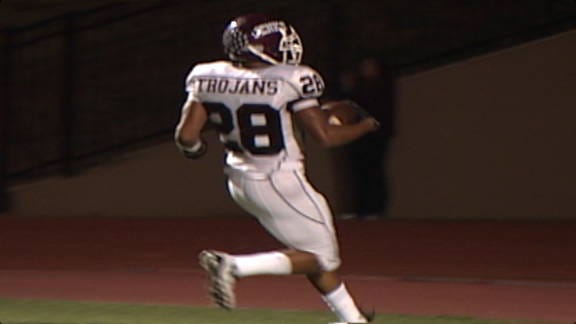 MOORE, Oklahoma -- The Jenks Trojans came away with another double-digit win Thursday, topping Soutmoore 70-21 and eliminating the SaberCats from playoff contention.

The Trojans also have secured a playoff berth with the win, so their next two games – against Broken Arrow and Norman – will determine the seeding.

The SaberCats (4-4, 1-4) opened up the game with a long touchdown drive on their first possession, but an attempted onside kick gave the Trojans the ball in Southmoore territory. Jenks capitalized on the short field and tied the game 7-7.

Jenks then scored 14-unanswered points – including a blocked punt that was returned for a touchdown – to take a 21-7 lead.

Tre Edwards responded for the SaberCats with a 59-yard touchdown run to close the gap to a single touchdown, but the Trojans returned the ensuing kickoff for a touchdown.

Southmoore finished off a long drive to close the gap to 42-21 in the closing minutes of the second quarter, but that would be the last the Jenks allowed.

The SaberCats will try to notch another win Oct. 28 at on the road against Shawnee, before closing out the season at home against Putnam City West.