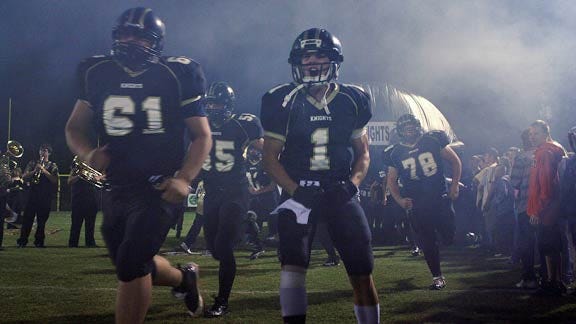 HENRYETTA, Oklahoma -- It was a penalty ridden first half, an anxious second half, but it ended as another district win for Henryetta, as the Knights scratched by Checotah’s Wildcats 38-35 last Friday night.

Henryetta won the toss, took the kickoff, and used up 16 whole seconds to gain the lead, as sophomore running back Blake Johnson ran 71 yards down the near side of the field for a touchdown.

Senior running back Kalon Moore ran in the 2 point conversion. Checotah’s quarterback threw an interception to senior linebacker Grant Jenson, but the Wildcats stiffened to stop the Knights at the 15 yard line.

Checotah gave the ball right back, they fumbled and senior Guy Kiehl fell on it at the 24. Kiehl ran 10 yards for a touchdown with 6:35 left in the first quarter, but the 2 point run didn’t work.

Checotah got on the scoreboard with a 19 yard touchdown pass, but their extra point kick was a bit short. Johnson found the end zone again from 23 yards away with 1:59 left in the quarter, sophomore fullback Kyle Britt added two more points with his run.

The first quarter took 47 minutes to play, as Henryetta led 22-6.

The Knights repeatedly turned the ball over on downs, and Checotah did the same, to which Henryetta had the ball stolen, and the Wildcats scored on a 5 yard touchdown run with 3:35 left until the halfway point. The 2 point pass was good.

Sophomore running back Caul Warlow ran for a 13 yard score, Johnson ran in the 2 point try, so the halftime score was Henryetta 30, Checotah 14.

Several Knights were injured late in the first half, which hurt Henryetta defensively.

Checotah scored on a 23 yard touchdown pass with 9:33 left in the third, the extra point was no good.

Henryetta chewed up clock, but were stopped at the Checotah 14.

The very next play, senior quarterback and defensive back Cody McKinney intercepted a pass and returned it 26 yards for a touchdown, he ran the 2 point conversion himself.

Checotah responded by firing a 53 yard touchdown pass their next play, and the 2 point try was good.

Backup quarterback Zach Speer threw an interception, which gave Checotah some momentum going into the fourth quarter, even though the Knights still led 38-28 after 36 minutes.

A flying leap by the Wildcat quarterback trimmed the score to 38-34 after a 4 yard run with 10:36 left in the game, and the extra point was good.

With the tension inside the stadium ratcheting higher and higher as the seconds ticked by, Henryetta punted, while Checotah moved ever closer to the end zone.

Moore captured a football that traveled in his direction, giving Henryetta the ball with 4:10 to go at their 7 yard line.

The Knights punted again, giving Checotah one last shot. Facing third and 10, Checotah set up for a long pass, but a sack saddled them with fourth and 24, and a incomplete pass thrown out of sheer desperation gave the Knights another triumph, and coach Kenny Speer earned his 100th victory of his career.

Jake Poull led the way on defense with 7 tackles, Tyler Brown and Josh Willis had 5, Logan Britt had 3.

Coach Speer praised his team for the way they performed.

“Our kids gutted it out, they played their hearts out tonight. I’m excited by the way they played, how hard they played, it was a big win,” Coach Speer said.