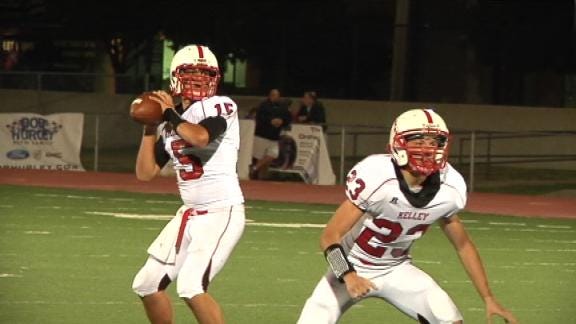 The Comets (2-3) scored a rushing, passing and special teams touchdown in the first frame. Austin Morris opened the scoring on the game’s first play. The Kelley sophomore, who was only in the starting lineup because a couple of the Comets’ regulars were banged up with minor injuries, burst past the defensive line and bolted to the sideline, outrunning the Hale defenders 57 yards to the endzone.

The Comets blocked the first of their two first quarter punts on the Rangers’ first possession of the night and added to their lead when Jake O’Brien plunged into the endzone from 3 yards out.

The Comets took a 21-0 lead midway through the quarter when Kemi Adetula leaped in front of Hale punter Demetrius Irvin’s kick. Adetula swatted the punt back towards the Rangers’ goal line, where Ian Dunning pounced on it for Kelley’s third score.

Just before the end of the quarter, junior wide receiver Jack Fischer broke past the Hale secondary for a 39-yard touchdown reception from Keaton Forrest. Kelly pulled away for a 48-0 halftime lead.

Hale struggled on offense all night and couldn’t keep Comets’ defenders out of the backfield. Quarterback Murphy Mitchell didn’t have any time to throw, and the offensive line didn’t open enough holes for the Rangers’ running backs.

The loss is the fourth in a row for Hale. The Rangers (1-4) have scored just 45 points this season through five games. Their two second half touchdowns kept the Rangers from being shut out twice in a season for the first time since 2008.

Bishop Kelley has responded well to some early-season setbacks. After starting the season 0-3, J.J. Tappana’s team has now won its last two games by a combined 110-14. The Comets had only managed 17 total points in the first three weeks of the season.

Bishop Kelley has outscored Hale 121-20 in the team's last three meetings. The Comets will host McAlester in Week 6, while Hale will visit Skiatook.