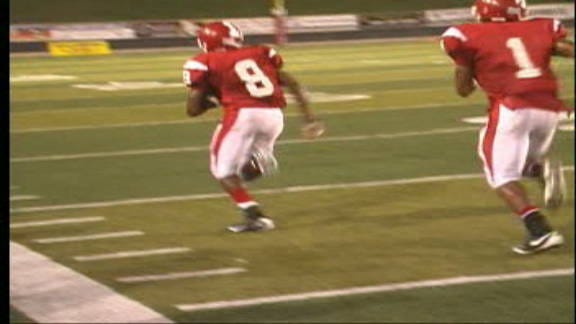 LAWTON, Oklahoma -- After giving up a two-score lead, the Lawton Wolverines battled back to win a 30-29 nailbiter over the Mustang Broncos.

The Wolverines (4-0) jumped out to a 7-0 lead when quarterback Brandon Taylor was intercepted by Diondrick Tawkoyty, who returned it 75 yards for a score. Another Bronco turnover led to a Lawton drive capped off by a three-yard Deaquan Wojciechowski touchdown to give the Wolverines a two-score lead.

Mustang (2-2) finally cracked the scoreboard in the first quarter with a Tyler Webster two-yard touchdown run to close the gap to 14-6.

David Glidden, No. 9 in the Oklahoma Sports Top 30, brought in a 35-yard pass for a touchdown to pull the Broncos to 14-12. The Broncos took their first lead of the game on a Justus Elliot blocked punt that he returned for a touchdown, with the two point conversion making it 20-14.

Lawton closed the gap to a three points on a 22-yard Cody Inger field goal. In the fourth quarter, Wojciechowski scored from 11 yards out to take a 24-20 lead.

Taylor connected with Jon Luckey on a 19-yard touchdown pass to pull back ahead 27-24, but the Wolverines wouldn’t lie down.

Wojciechowski would score his third touchdown of the night, an 11-yard run to take a 30-27 lead with 40 seconds left on the clock.

The Broncos would attempt a final drive, but Tyrequek Zimmerman – No. 15 on the Oklahoma Sports Top 30 – would pick off a Taylor pass to end the drive.