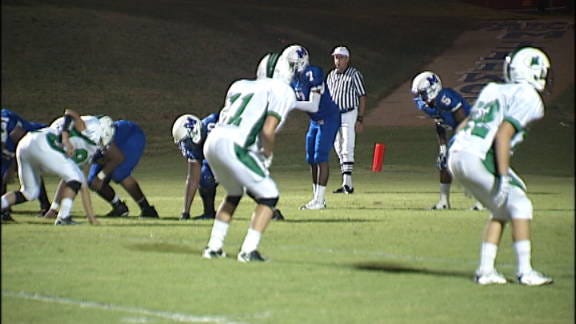 OKLAHOMA CITY – One of the biggest showdowns in the state so far took place Friday night, with Millwood taking down Bishop McGuiness in a 48-41 shootout.

Millwood quarterback Kevonte Richardson started the Falcons off on the right note, connecting with Michael Cole for a 73-yard touchdown and a 6-0 lead.

The Falcons took an early 20-0 lead, but the Irish battled back as LaRone Richardson ran 39 yards for a touchdown.

McGuinness rallied all the way back and took a 27-26 lead into the half.

Millwood scored two straight touchdowns to start the second, but the Irish rallied back again with a three-yard touchdown by Drew Neuberger to cut the Millwood lead to 40-33.

Kevonte Richardson responded with a 95-yard touchdown run and the Falcons converted a two-point conversion to make it 48-33.

McGuiness responded with a touchdown, but it wasn’t enough as Millwood picked up the victory.

The Falcons (3-0) will head to Alva next week while the Irish (2-1) will take on Clinton at home.