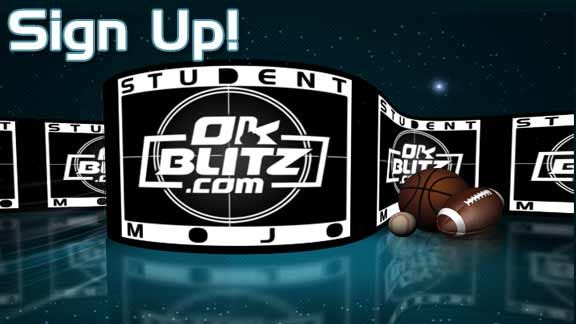 Are you interested in reporting from the sidelines? YOU could become a student mojo, write about your favorite team, and rock an Oklahoma Sports T-shirt! Find out more about the Student Mojo Program and sign up today!

HENRYETTA, Oklahoma -- It’s amazing, the changes a year can create. After only one game, the Knights of Henryetta already equaled their win total for the entirety of the 2009 season, as they chewed up 268 rushing yards on their way to a 28-7 landslide victory on the road at Hartshorne Friday night.

Henryetta took the opening kickoff and covered 64 yards in five plays, as senior running back Kaylon Moore plunged into the end zone from 2 yards away with 10:18 left in the first quarter. Sophomore Cassidy Wion’s extra point kick was good. Hartshorne took the ball and moved it onward, getting a 2 yard TD run with 4:23 to go in the quarter, and the extra point tied the game.

Twelve minutes into the season, the score was 7-7. Henryetta turned the ball over on downs, but the Knight defense forced a Hartshorne punt, which was mishandled, giving Henryetta possession on the home team’s 11 yard line. One play was all that was needed for Moore to get in the end zone, Wion’s kick made it 14-7 with 6:33 to go until halftime.

Another bad snap on a punt two minutes later gave the Knights the ball on the Miners’ 30, senior quarterback Cody McKinney tunneled a yard to get a touchdown with 2:25 remaining until the half. Moore plowed in for the 2 point conversion, and Henryetta led at halftime 22-7.

Senior defensive back Josh Willis snagged three interceptions in the second half, but neither side could gain an advantage in the third quarter. On the first play of the fourth, Moore galloped 45 yards down the right side of the field for his third touchdown, but Wion’s kick was blocked. That pretty much iced the game, and it ended with the Henryetta Knights 28, Hartshorne Miners 7.

McKinney was 6-for-12 passing for 60 yards and ran for 33 more, while senior receiver Guy Kiehl had 46 yards rushing in his first game as a Knight.

Moore had 110 yards on 13 carries, and sophomore running back Blake Johnson chewed up 62 yards in 11 tries. The ground game was huge for Henryetta. Senior defensive back Jake Poull led on defense with six tackles, while Kiehl had five and three other players had four each.

“Our line was awesome tonight, I didn’t even get touched,” Moore said. “Our defense played great. We faced a very good team tonight and did well.”

"Defensively, we settled in after their first possession, shutting them down, the running game looked good,” Coach Speer said. “We ran the ball well, and we’re extremely excited about what we got.”

Possibly the biggest game of the year is coming up Friday night, as the Knights (1-0) play in Morris at 7:30 p.m., the Eagles (0-1) were bitten by defending 2A champs Lincoln Christian 34-6 last Friday.