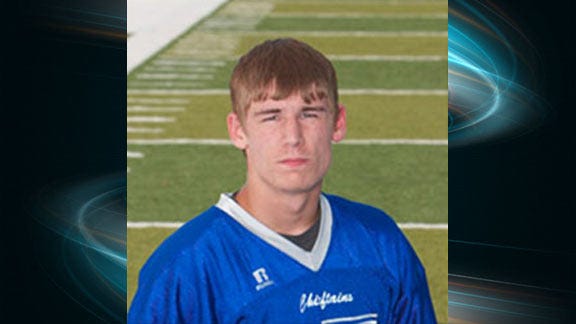 SAPULPA, Oklahoma -- A 16-year-old Sapulpa teen, who was a member of the Sapulpa High School football team, was killed in a one vehicle accident Thursday afternoon in Creek County.

Troopers say Justin Fitzpatrick was a passenger in a pickup truck which was traveling south on 177th West Avenue at a high rate of speed. The pickup lost control on gravel in the roadway, causing the truck to leave the road, strike a fence and roll onto its side before striking a tree.

Fitzpatrick was pinned in the wreckage for two and a half hours.

OHP troopers say the driver of the pickup truck, 17-year-old Dennis Eddleman was taken to a Tulsa hospital with injuries to his head and arms.

Fitzpatrick was a junior at Sapulpa High School where he played two positions on the football team, wide receiver and defense back.

The team is opting to play in its regularly scheduled season-opener Friday night against Ponca City per the request of Justin's parents.