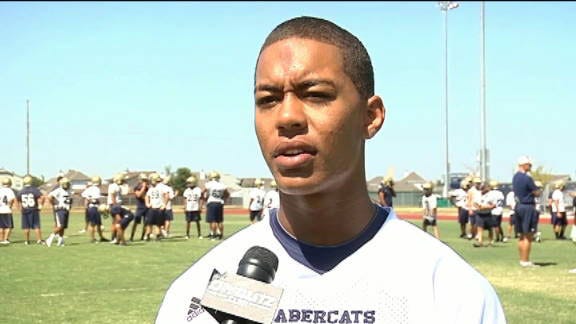 The son of former OU quarterback Charles Thompson, Kendal has always wanted to follow in his father’s footsteps. But while Kendal idolized his father, he also wanted to make sure people knew him as something other than just his father’s son.

“You always knew people knew your last name because of your dad,” Kendal Thompson said. “So going into high school I wanted to make a name for myself, and I feel like I’ve done that.”

Kendal plays the same position as his father, but his skill set is vastly different. Charles Thompson’s greatest strength was his athleticism and ability to scramble. Kendal does have good mobility, but he prefers to stay in the pocket and make use of his strong arm.

“He’s a different kind of player than Charles was,” said Southmoore head coach Chris Jensen. “He throws the ball a lot better; he’s a dual-threat quarterback.”

Thompson’s love of the OU program led to him committing to the Sooners last November, long before most other high players had made their final decisions.

“I was always a Sooner fan growing up, but going into the recruiting process me and my dad sat down,” Kendal Thompson said. “It happened to be that OU came after me and it happened to be the best fit for me. I think I made the right decision.”