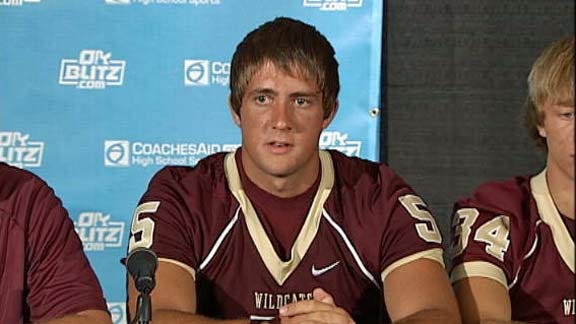 OKLAHOMA CITY – Several coaches at Oklahoma Sports Media Day Saturday talked about the fact that they like being the underdog. The Cashion Wildcats are the exact opposite.

The Wildcats finished with an undefeated regular season last year and made it to the third round of the playoffs before a hotly contested 52-47 loss to Stroud.

Head coach Lynn Shackelford said his team is aware that having such a successful year will paint a target on their back. He said every opponent the Wildcats face will give them their best shot, which should help keep Cashion from growing complacent.

Shackelford added that he and his team have been on the other end of the spectrum, when they wanted to play the spoiler for the dominant teams on their schedule. Now they are that dominant team and know they can’t take a game off or underestimate any opponent.

Shackelford previously coached at Morrison, another consistently dominant program. The experience he gained there has helped him at Cashion, and he heaped plenty of praise on the Morrison program and the people still there.