J.T. Realmuto Made the Right Choice 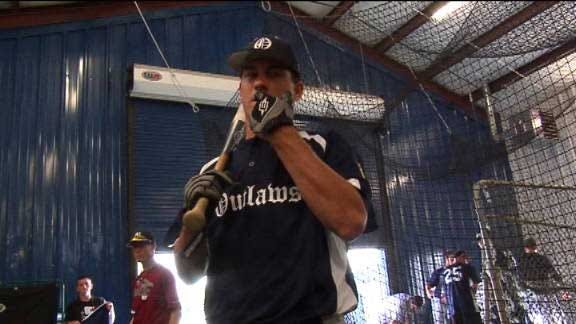 OKLAHOMA CITY – The Florida Marlins selected Carl Albert standout J.T. Realmuto in the third round of the Major League Baseball Draft Tuesday, marking the affirmation of a choice Realmuto made years ago to focus on baseball.

Realmuto has been a standout athlete in several other sports, most notably football and basketball. He has always divided his time among sports, but his passion was always baseball.

“Baseball has always been my love,” Realmuto said. “Ever since I first started, it’s been my favorite sport and that’s what I’ve always wanted to do.”

Realmuto had plenty of opportunities to quit playing other sports in order to focus on baseball, but he said taking part in football and basketball has kept him from getting burned out on his true calling.

“Actually, the other sports keep me relaxed,” he said. “I don’t put all my energy toward baseball, so every time I touch a baseball field I want to be out there. I’m not getting tired of it.”

Realmuto now has a decision that most people would envy. He has already committed to Oklahoma State, but now has the opportunity to jump straight to the pros. So which one will he choose?

“Obviously I’d like to play pro ball, but if I don’t get what I want to get out of it then I’ll just go and have fun at Oklahoma State,” Realmuto said. “I’d love to be up there too, we’ll just have to see what happens.”

Realmuto said he has a very specific amount of money he wants to be paid when he signs a contract. If the Marlins are unwilling to offer him the amount he wants, he will try to improve his draft stock with a strong showing for the Cowboys.

In order to keep the option of playing college ball open, Realmuto is unable to sign an agent. That will put the pressure of negotiating a contract squarely on the shoulder of him and his family.

“We’ll just have to do it on our own,” Realmuto said. “My dad is going to help me out with it; I’ll make all the decisions, and he’ll help me with what I need.”

Realmuto has been in contact with several people to help gauge the kind of money he should receive. He was selected in the third round, and players picked in that same round last year earned between $400,000 and $800,000 in guaranteed signing money.

Realmuto’s selected in the third round was higher than many experts projected, but he said he was not surprised that he ended up with Florida.

“I felt, with the Marlins, they seemed to like me a lot,” he said. “We talked about it before the draft, and I told them I wanted to get drafted in the top four rounds. They agreed with it.”

J.T. Realmuto Made the Right Choice