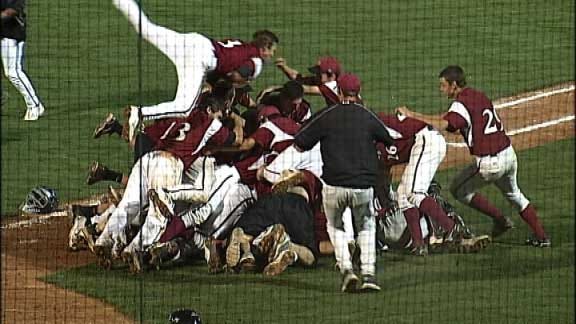 The Redskins and the Rams battled back and forth and took a 9-9 tie into the bottom of the ninth inning. The Redskins loaded the bases and Union batter Josh Whisler – after taking a strike in his first pitch – looked at four straight pitches to draw the walk and claim the 10-9 win.

The Rams tied the game at 4-4 and in the top of the fifth a Payton Allen two-run single gave Owasso its first lead of the game. Garrett Schaede hit a sacrifice bunt to add another run to Owasso’s lead.

Ambrose and Taylor Alspaugh hit solo home runs to tie the game once again at 6-6. Cole Webb hit into a fielder’s choice to score a run and Shane Kinnear followed with an RBI single to retake the lead 8-6 over the Rams. Union would add one unearned run to extend its lead to three runs, but Owasso would respond.

Owasso pulled within one run and Union closer Cole Way hit Corey Sole with the bases loaded to bring the tying run home and set up extra innings.

This gives Union its third Class 6A Gold Ball, its first since winning back-to-back titles in 2005 and 2006.