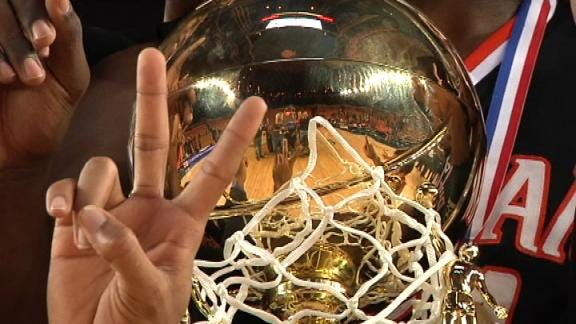 TULSA, Oklahoma – For the third time in five seasons, the Putnam City Pirates are the boy’s basketball 6A state champions. PC took down the Midwest City Bombers in Saturday night’s championship game, 68-59.

Each team built up momentum in spurts during the first half. The Bombers opened the game on a 9-3 run. Xavier McClish ignited the crowd with an acrobatic, spinning left-handed layup to put Midwest City up by six.

Putnam City battled back after calling a timeout. Hunter Gibson scored 11 points in the half. His long 3-pointer in front of the Bombers’ bench gave his Pirates a 22-13 lead in the second quarter. Putnam City led 28-22 at halftime.

The teams traded runs again in the third quarter. Trez Colbert’s steal and dunk in the Midwest City backcourt pulled the Bombers to within one, 31-30 midway through the frame.

The confidence spilled onto the court in the second half. The Pirates went on an 18-0 run in the third quarter to put the game away. Midwest City tried to rebound from getting outscored 22-8 in the quarters, but could never get the margin back within seven points.

Putnam City has won four championships since 2002, but this year’s team is the first in school history to post back-to-back titles.

“It’s an indescribable feeling,” smiled Brown after the game. “(It’s) very special. We love each other.”