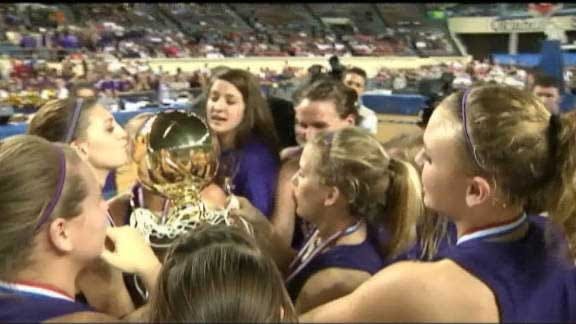 She continued to pace Chattanooga in the second quarter with another two from behind the arc to put Chatty up 23-21 at the half.

But Okarche’s defense and post scoring kept the team in the game and eventually allowed the Lady Warriors to overtake Chattanooga in the second half.

Brittany Pfaff scored five straight to open the second half, giving Okarche its first lead of the game. That was five of an early third-quarter run that put Okarche up 27-23.

Baughman hit another 3-pointer to bring Chattanooga back within one point, but another quick six from Okarche put them back on top 33-28 in the waning minutes of the third quarter.

“That’s the great part about this team; there isn’t anyone you can focus on,” said Okarche head coach Cherie Myers. “I don’t know if it’s good or bad that we don’t have one of those stars, but everyone stepped up when we needed them to.”

Chattanooga responded with five from Ali Brown and Bailey McBride to tie the game at 33 going into the final quarter of play.

Both teams traded baskets in the opening minutes of the fourth quarter, but Kristin Meyer scored five straight to give Okarche a four-point lead. Kelsie Steffensen added two of her own to extend the Okarche lead to 43-37.

“She played hard and did what we asked her to do,” said Myers. “She even chased some people.”

When Okarche began to play a game of keep-away with Chattanooga, Chatty was forced to foul and Pfaff hit six free throws to ice the game for Okarche.

Pfaff finished the game leading all scorers with 18, while Baughman hit 5-of-6 from behind the arc for Chattanooga to lead them with 15.

“I knew I hadn’t done very well and I knew that I had to come out [in the second half] and lead this team,” Baughman said. “I told myself I had to get my intensity up to win this.”

The Okarche girls grabbed their first state title under Myers after making a semifinal exit a season ago.