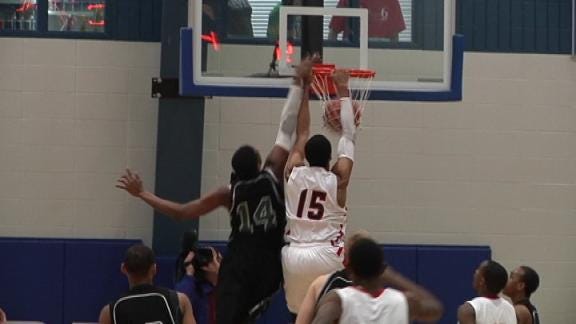 TULSA, Oklahoma – The third time must be the charm for the East Central Cardinals. After falling to the Edison Eagles twice in the regular season, the Cardinals outscored the Eagles by 13 points in the second quarter en route to a 62-56 win.

A big second quarter helped push the Cardinals past the Eagles in Friday night’s 5A area round game. After trailing 11-5 after the first quarter, the Cardinals finally found a rhythm on offense. Larone Fitzgerald and Damion Hooks helped East Central build a 12-0 run that really put the game out of reach.

Andrew Wilson’s dunk over Steven Hamilton midway through the second quarter got the crowd out of their seats. Later in the quarter, the lanky junior swatted one of Hamilton’s shots off the backboard to start a fast break. He scored seven points in the first half and East Central rode early momentum to a 28-21 halftime lead.

Clyde Hill returned from elbow surgery to play for the Eagles.

East Central’s 20th win of the season vaults them into the state tournament. Edison will face an elimination game Saturday night.