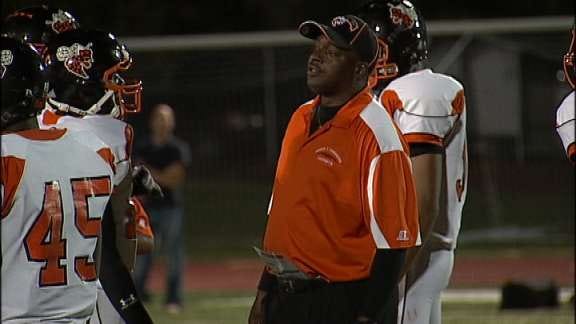 TULSA, Oklahoma – Antwain Jimmerson resigned as head football coach and athletic director at Booker T. Washington High School on Monday, citing it was in the best interest for him and Tulsa Public Schools, according to TPS Athletic Director Dr. Stephanie Spring.

Jimmerson had been serving an indefinite suspension from being head coach and athletic director since October for violating recruiting, residency rules and eligibility rules. In all, 40 athletes were found ineligible at BTW.

The Hornets football team was forced to forfeit district games against Miami, Pryor and Hale which kept them out of the 2009 OSSAA Playoffs.

Jimmerson coached the Hornets for 10 seasons, leading the school to the 5A State Championship in 2008 – the school’s first title in 24 years.

“He’s done a heck of a job,” Spring said. “I appreciate what he’s done with the program and I wish him nothing but the best moving forward for him and his career and his family.”

Despite the violations that occurred while Jimmerson was head coach and athletic director, Spring believes that Jimmerson will have opportunities to coach football again.

The Booker T. Washington head football coaching position is one of the premier jobs in the state. Spring said she expects at least 200 applicants and hopes to have a coach hired by mid-March.

“We want to find a quality person to move the program forward and be successful,” Spring said. “At a school like Booker T. Washington, that’s a given – we’re going to be successful.”