Local Players in the NFL: Week 7 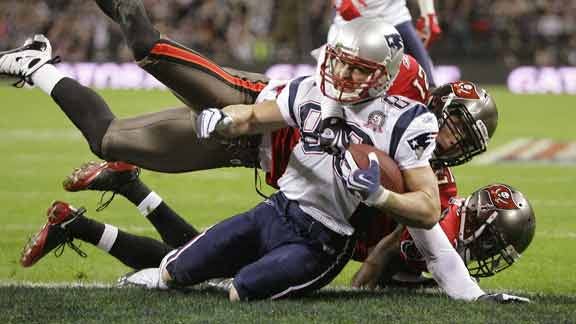 Heritage Hall
Wes Welker had 10 receptions for 107 yards and a touchdown in New England’s 35-7 win over Tampa Bay. Welker also ran the ball once for six yards and returned four punts for 53 yards. With his effort, Welker has 490 all-purpose yards on offense and four touchdowns.

Pauls Valley
T.J. Rushing recorded two tackles, returned one kick for 19 yards, and one punt for 11 yards in the Colts’ 42-6 win over the Rams. Rushing’s two tackles came on special teams.

Foyil
Josh Brown made two field goals for the second straight week in the Rams’ 42-6 loss to Indianapolis. Brown nailed a 30-yarder in the first quarter and a 45-yarder in the third quarter. The former Foyil Panther has made six of his nine field goal attempts this season.

Ada
Jeremy Shockey had a season-high 105 yards receiving in the Saints’ 46-34 victory over Miami. Shockey’s longest reception was a 66-yard catch that led to a touchdown. The former Ada Cougar has 304 yards receiving and three touchdowns this season.

John Marshall
Antonio Smith recorded one tackle and one pass deflection in Houston’s 24-21 victory over San Francisco. Smith has 13 tackles this season and 138 tackles in his career.

Booker T. Washington
Mark Anderson had one tackle in the Bears’ 45-10 loss at Cincinnati.

Kingfisher
Curtis Lofton had five tackles in Atlanta’s 37-21 loss to Dallas. Lofton has 62 tackles this season and 156 in his career.

Local Players in the NFL: Week 7