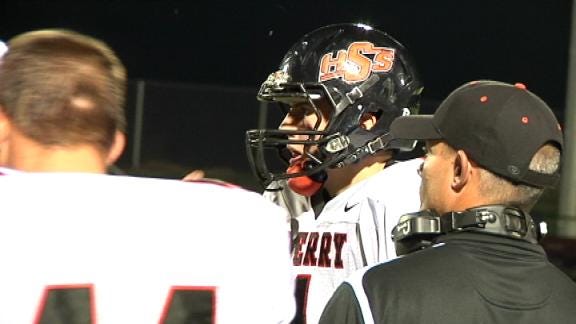 OKLAHOMA – Rain postponed a few games from Thursday night but the weather should cooperate for Friday night’s battles on the high school fields around Oklahoma.

Some of the featured matchups are in Tulsa tonight when undefeated Jenks (5-0) and Broken Arrow (4-1) hook up in a battle of 6-A titans. Both are coming off 30+ point wins last week.

Unbeaten Claremore Sequoyah (5-0) visits a Berryhill team that has played better than its 3-2 record would indicate. The Chiefs have lost to two undefeated teams on the road against Glenpool and Cascia Hall. Sequoyah is winning by an average of 19 points per game.

Sapulpa (0-5) got blown away by Jenks in Week 5 and looks to get back on track tonight against the struggling Memorial Chargers (2-3) at LaFortune Stadium. The Chargers have had a Jekyl and Hyde season. Some weeks they look unstoppable and some weeks they just can’t put anything together on offense. Look for them to ride running back Damian Zachery tonight against the Chieftans.

The Claremore Zebras (3-2) travel to Bartlesville (5-0) Friday night as well. The Bruins are off to the best start in team history and are led by junior quarterback Kirby Schoenthaler and senior wideout Mike Thompson. Claremore won two to start the year, then lost two games. If the trend continues, the Zebras could win again tonight after beating Memorial at home last week.

Booker T. Washington probably never expected to start the season 3-2 but has had a pretty rough schedule to start 2009. Pryor is off to a blazing start at 5-0 and hosts the Hornets tonight in a big 5-A District 3 showdown.

Stick with the Oklahoma Sports for more scores and highlights throughout the night.