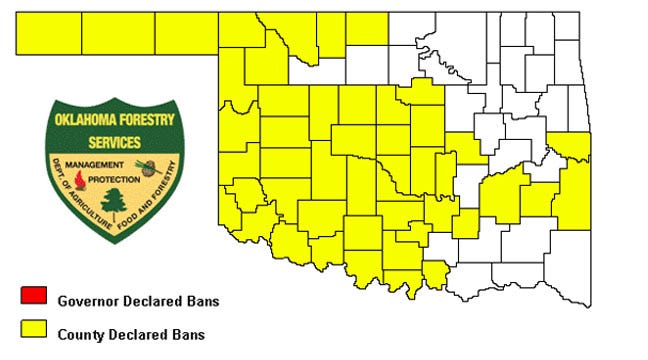 It will rain one of these days, and when it does I just hope it does not try to catch up all at once. Officially, we are running more than 8 inches below normal on our precipitation with no drought breaking rains anywhere in sight. A few spotty showers did pop up first thing this morning and a few more may develop later this afternoon or early evening, but those will not do much more than provide some brief, very localized relief, if even that.

And as the soil and vegetation continues to dry out, then temperatures will continue to heat up and we have a nasty feedback in place. The hotter it gets, the drier it gets and the drier it gets, then more heat will follow. As a result, don't be surprised if burn bans continue to be expanded across the state. Speaking of which, notice the burn map on the right. Many of those counties in the eastern half of the state are evaluated on a weekly basis and more may well be added on Monday.

Temperatures will be well into triple digits again today, and tomorrow, and Tuesday, and.....well you get the idea. The only possible break will be Tues into the day Wed. A weak tropical system is drifting onto the Texas coast from the Gulf of Mexico. This system will work its way around the upper level ridge and eventually brush by Oklahoma. It is a very weak system and has not even produced much in the way of rainfall for Texas. But, it at least provides a glimmer of hope for a few more clouds in the sky and about a 20% chance of showers or storms during that time frame. The extra clouds should also knock a few degrees off the daytime high temperatures.

Other than that, there is always the slim possibility of an isolated storm or two forming on just about any given day and primarily in the more terrain favored locations. These would be late afternoon events, if any form at all, and will be brief, but locally quite heavy. If you happen to catch one of those, count your blessings.

By the way, along with the triple digit daytime temperatures, we are not getting much relief at night. Our overnight lows will only be in the upper 70s to lower 80s. We will also have a southerly wind providing some ventilation during the daytime hours which will help somewhat. Dew point temperatures will be in the 60s so the heat index could be as much as another 1-5 degrees above the air temperature. This all adds up to a dangerous heat wave and the excessive heat warnings have been extended into the day Monday and may well be necessary for much longer than that.

So, stay tuned, stay cool, and check back for updates.