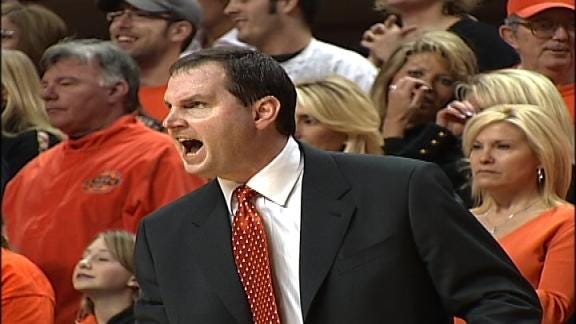 TULSA, Oklahoma – The last name ‘Sutton’ means something in this state. It a surname that carries power and prestige on the basketball floor. The name is immortalized on the court in Stillwater. It’s also at the top of the coaching record books at Oral Roberts.

After time, the weight of that name became too difficult to support for the eldest of three sons. The heaviness that Sean Sutton carried led to life-altering mistakes.

For the son of a legend, hoisting the daily burden of lofty, unmet expectations began to tear him down.

“I was stuck in the past,” Sean said from the private coaches lounge at ORU. “That’s never a good place to be. I had a hard time letting go.”

There was a lot to let go of. He was forced out of his posh gig as Oklahoma State’s head basketball coach. He failed to carry on the legacy of his famous father, whom he succeeded. Posting a 13-19 Big 12 record over two seasons didn’t quite fill Eddie’s enormous shoes.

Sean needed a way to wash away the disappointment. He needed to quell the pain that regularly snuck its way into his thoughts. The crushing weight of feeling unfulfilled grew heavier each day.

One year ago, Sean was arrested for attempting to illegally obtain controlled, dangerous substances and using a communications device to facilitate a felony. He went to jail, bonded out, then watched his career, future and reputation erode.

“It’s not as simple as you turning off that switch and it’s gone,” Sutton said of his drug habits. “It’s a fight every day.”

Drug addiction suffocates millions of people around the world. Sean got trapped in the same downward spiral that impedes people from all walks of life. Drugs didn’t care that Sean was a role model. They didn’t care that he was famous, or made millions of dollars coaching the Cowboys.

In Old English, ‘Sutton’ means “south town”. It would have been hard to find a man more ‘south’ than Sean. He was distressed and depressed. He was broken, closed off and trapped.

It took a very public arrest to break Sean’s dependency on synthetic solutions. He enrolled in treatment to combat his cravings. Now, he’s beating back forces that are stronger than simple cravings. He’s winning his battle thanks to those who know him the best.

Sean and Scott Sutton are just 18 months apart. Growing up they did everything together, including play basketball. Day after day, the two brothers passed, dribbled and shot their way to an unbreakable bond. Sean played every day from the time he was five until he graduated from OSU in 1992. The two were best buddies. They were inseparable.

“Once we got into our careers, we didn’t see each other as much,” Sean admitted.

Sean graduated from OSU and began a coaching career at the University of Mississippi. His trails led him back to Stillwater and, eventually, he took the reins from his father. Scott watched from afar, as the head coach at ORU, while Sean went through the ups and downs in his professional and personal life.

After Sean was arrested, he had to rely on family more than he ever had before.

That’s when Scott reached out to his older brother and they reunited in a profound way. The duo was back in its element again – on the basketball court.

Sutton is not an overly boisterous person by nature. He sat quietly in a leather armchair in a small room overlooking the Golden Eagles’ practice gym. He smiled, was pleasant, and was very excited about working with his brother again.

“It’s been really nice to be able to see him on an everyday basis,” Sean said about working with Scott. “I can see while being here why his teams over the years have been so successful.”

Scott hired his older brother in August 2010 to be an Executive Advisor for the Golden Eagles. Sean can communicate with the other coaches during games and practices, but isn’t allowed to have hands-on interaction with players.

The most telling aspect of his new role in basketball is that it’s unpaid. He’s working for free, akin to an intern, just trying to put some merit back on the top of his resume. With every pro bono practice, his confidence and reputation bloom.

During the course of our nine minute interview, Sutton used the phrase “great opportunity for me” upwards of a half dozen times. He’s happy now. He’s a peace with himself. He’s ready to coach again.

“I struggled the two years I wasn’t connected to a team,” Sean said. “I’ve learned a lot. I think it’s always important to grow and learn as a coach.”

He says he hasn’t once thought about doing drugs since his arrest. He also says his time at ORU has helped him grow as a man and as a coach. He expects to be a coach again someday, he just doesn’t know where or when.

Nowadays, he’s more interested in studying zone defenses than getting a high. He’d rather spend time with his wife, Trena, and three sons than search for a buzz. He’s a new man with new life goals.

He’s a Sutton, and the load he once carried is lighter than ever.