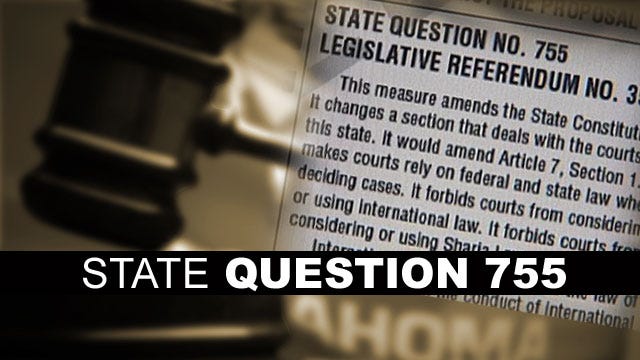 OKLAHOMA CITY -- A federal judge in Oklahoma City has ordered a preliminary injunction in the State Question 755 case.  Her order prevents the state from certifying the results of the election until she rules on the merits of the claims from the plaintiff.

No timetable was given for her ultimate ruling or how the case will proceed.

State Question 755 was a voter-approved measure banning the use of Islamic and international law in state court.

Judge Miles-LaGrange said the federal court must consider two very compelling principles to our democracy, and she needed more time to weigh all arguments presented before deciding if a preliminary injunction is warranted.

Muneer Awad, the executive director of the Council on American-Islamic Relations in Oklahoma, is suing to block the law from taking effect. He said the law demonizes and condemns Muslims.

Voters approved the state constitutional amendment by 70 percent on November 2, 2010.