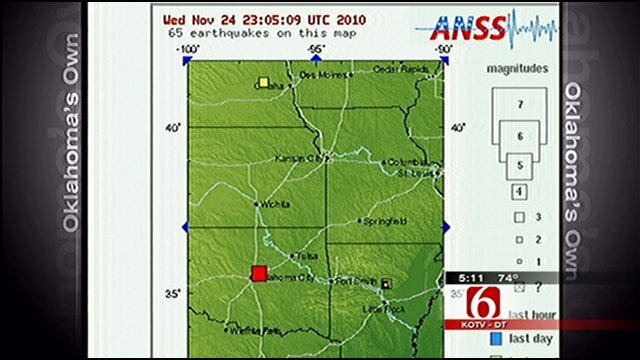 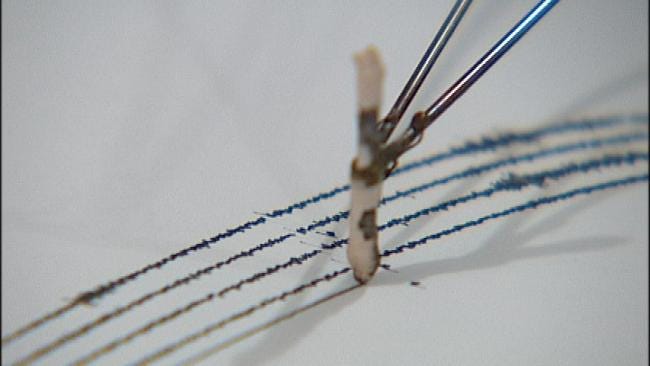 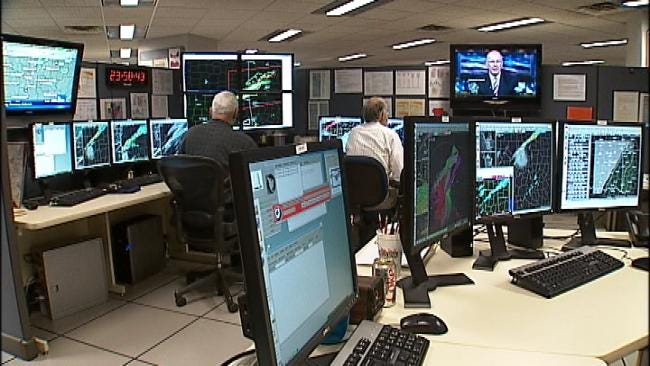 "The earthquake was just an added bonus to the tornado watch that's in effect in parts of the state," said Steve Piltz, National Weather Service. "Really, if you look at it we have the tornado watch, the earthquake and even a little chance of wintry precipitation tonight and tomorrow. Right now we have it all."

The Oklahoma Geological Survey said the earthquake measured 4.0 and struck between Jones and Luther. At least five small earthquakes have been centered in and around Jones this year. The U.S. Geological Survey estimated the quake's magnitude at 3.9.

"The folks on the west side of the building felt it first," Piltz said. "And then everybody kinda felt the shake as it moved deeper into the building. We were all sitting up here working the severe weather, all of our monitors shook and we all turned around. We knew what it was."

A second earthquake struck at 5:45 p.m. in Lincoln County.  The U.S. Geological Survey estimated its magnitude at 3.2.

No damage was reported from either small quake. Researchers said 2.5 to 3.0 magnitude quakes are typically the smallest felt by people.

Wednesday's earthquake comes just over a month after a 4.3 earthquake shook parts of Oklahoma.

So do all of these quakes signal rockier times ahead?

"We're on the upper end of what we normally expect to feel in Oklahoma. There's no history to say we're going to have the big one. But you just kind of watch and wait," Piltz said.

NewsOn6.com's Facebook page filled up with comments from people who said they felt the tremor Wednesday. There were 60 comments within the first 15 minutes following the quake.

Karen Nolan in Beggs said: We felt it in Beggs.  Working on tomorrow's dinner, the whole house quivered and I could hear the rumble.  My husband had surgery this morning, and he felt it in bed.  My sons, Phillip and Ian felt it, and so did my dad visiting from California.  He felt right at home.

Janet Frazier: We live off 101st between Yale and Sheridan.  I heard a sound, assuming it was thunder.  My kids came downstairs and said their beds shook!

Patricia Clipp in Claremore: I was sitting in my bedroom, watching Oprah, and my bathroom closet doors shook. It sounded like someone had hit my bathroom wall with a car or something really heavy. The only actual shaking I felt was the bathroom door vibration. My cat, Baby Dirt, also noticed the commotion. She woke up from a dead sleep and freaked out. Her hair and ears were standing up. It sounded like thunder or something slamming into my apartment. The vibrations felt like a really close thunder/lightning strike or the life flight helicopter flying over. It was a mild flutter.

Keri Cox Stevens: My 3-year-old asked me what that sound was and I said probably an airplane because I didn't think it would be thunder. Didn't even occur to me until I got on the computer and read this.

My name is Natalie Meyer. I was actually playing Call Of Duty on my Xbox 360 while sitting on the sofa and thought there was something under the sofa, so I started crawling around trying to figure out what it was until my mother (Debbie Meyer) told me that she thought there was just an earthquake because her computer screen was shaking. We definitely felt it this time though. By the way, we live in Sand Springs ... not Tulsa. Lol. Pretty crazy though!

Angela Hargea: Here in Chouteau, I just thought it was my unbalanced washing machine on spin cycle. Had no idea it was covering for the real thing! Either way I got a back massage out of the vibrations!

John Newport: Yes, felt it here in Okmulgee at the Creek Nation complex. My office is up on the 2nd floor and our computers were shaking and you could feel the shaking beneath you.

Sarah Blomfield: My family and I felt it on the county line, 61st St., between SW Blvd. and Hwy 97. We heard the house creak. My husband thought it was wind until I pointed out that the trees were still. A couple seconds later, the house rattled a little. I wondered if it had been a helicopter except it didn't last as long as a helicopter's effects usually do. I dismissed it until I saw the note on Facebook. My husband is talking about calling our insurance agent about earthquake insurance. Can't say it's a bad idea these days!

Shawn Cook-Hurlbut: 91 & 145 in BA...I was painting the kitchen cabinets...I thought I had bumped the cabinet with my hand by accident cause I jumped when it happened...glad to know I'm not the one that caused the messed up cabinet.

Janie Molloy Ledbetter: I live about ten miles south of Bristow and it shook my recliner!! I was able to stay in it though...barely. =)

University Of Tulsa Student Addresses Changes To College Under COVID-19