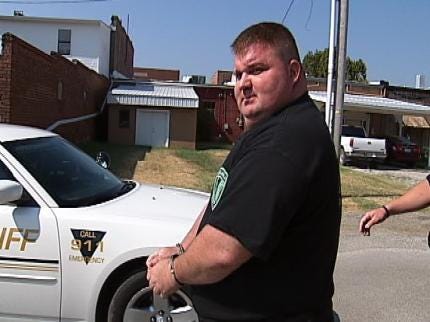 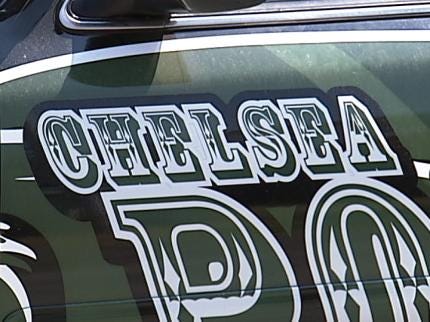 CHESLEA, OK -- A Green Country police chief was arrested Friday, August 13 for drug shopping. Chief Jeremiah Murrell was sitting at his desk at the Chelsea, Oklahoma police station when he was handcuffed by Rogers County Sheriff Scott Walton.

Chief Murrell has become part of an ever growing number of people accused of breaking the law to get his hands on prescription pain killers. What's worse is this is his second-go-round.

When he was the police chief in Buffalo, Oklahoma, investigators caught him but told him if he resigned as chief - got out of law enforcement and got help for his habit - they wouldn't prosecute.

When they found out he was police chief again, a new investigation began and this time, he wasn't given a pass.

News On 6 was there when Jeremy Murrell left the Chelsea police station in handcuffs and was put into a squad car to be taken to jail. It has to be a low for any police officer, let alone the department's chief.

Lori Fullbright: "Chief, I know it's hard, but do you have anything to say?"
Chief Jeremy Murrell: "Nope."

Chief Murrell is accused of doctor shopping, or getting painkillers from several different doctors - sometimes at the same time - which is a felony.

"We have an arrest warrant for 12 counts of obtaining controlled, dangerous substances by fraud," said Sheriff Scott Walton of Rogers County.

The Rogers County Drug Task Force, which includes the Claremore Police Department, the Oklahoma Bureau of Narcotics and the Sheriff's Department, has been conducting this investigation for the past year.

An affidavit says Murrell received Lortab prescriptions from seven different doctors and filled those scripts at nine different pharmacies for a total of 3,000 pills since last fall.

We found video from a few years ago on Myspace that shows Chief Murrell training for a strongman championship. That's when he was police chief in Buffalo and had a previous run-in with prescription fraud accusations.

"A black eye for law enforcement, but proves nobody is above the law and the Rogers County drug task force; nobody's exempt from these infractions of the law," Walton said.

Jeremy Murrell's bond was set at $12,000. He bonded out shortly after his arrest.