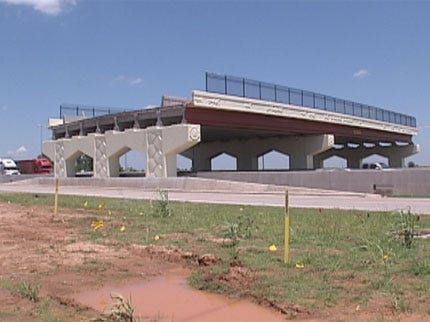 OKLAHOMA CITY-- Right now Oklahoma is cutting funding to agencies and programs across the state because of the shrinking budget. At the same time state agencies are spending millions of dollars on public artwork. Why? Because lawmakers told them they have to.

Some of the most visible projects are the designs going up along Oklahoma's highways as part of bridges, overpasses and sound barrier walls. They're funded as part of a state law enacted in 2004 called the Art in Public Places Act.

It applies to every agency, department, board, council and commission of the state. When constructing new buildings and infrastructure or renovating the old, each organization must take one and a half percent of the design and construction costs and re-allocate it to incorporate some type of art. It applies to projects on state-owned property with a price tag of $250,000 or more.

So far five projects have been completed as part of the art in public places program. The bridge over the Turner Turnpike with an Osage shield was the first to be completed in 2008. When the Oklahoma Turnpike Authority rebuilt the bridge, it spent $120,000 on the mosaic-style art. The Turnpike Authority is not a state agency, but because the highways are state-owned, it falls under the art mandate.

When the Grand River Dam Authority built an Ecosystems and Education Center in Langley they spent about $60,000 on a terrazzo floor which doubles an educational map of Grand Lake. In fact, every piece of art is required to contain an educational component.

A bronze sculpture depicting a Native American man with coin jewelry sits near the State Capitol. It was funded when the State Banking Department put up their new building. The required cost was $145,000.

Right now Oklahoma's Secretary of Agriculture, Terry Peach, is running his department with 60 fewer employees because of budget cuts. The artwork outside their new building cost $150,000.

Peach says, at first, he was not happy about spending part of his building's budget on art. But he says he was able to help with the design and he likes the way it turned out.

However, Peach does question the state's priorities in today's economy, when people are losing their jobs.

"I think when the economy is strong like it was when that legislation was passed; I think it was a great idea. Uh, do I think maybe the legislature might look at now and put a moratorium on it for a couple of years... maybe it's something they should look at," suggested Secretary Peach.

But the director of Art in Public Places defends the program, pointing out the agencies aren't required to spend any extra money. She says the money is already set aside for construction and couldn't be used on salaries.

"I do not want teachers to suffer. I don't want us to be laying off police. But it is... it's like it's a different pot of money. It doesn't relate. It's apples and oranges," said Debby Williams, the Director of Oklahoma's Art in Public Places program.

But according to the State Finance Director, Michael Clingman, the money could be used on salaries in some cases.

"It's up to each agency. But there's always a chance, depending on how they get the money," said Clingman. "It's really up to the legislature and what their priorities are."

He says lawmakers ultimately have the power to change appropriations.

Compare Oklahoma to Texas. They don't have a public art program. The Texas Department of Transportation does have the option to spend money on highway aesthetics, but no more than one percent. The well-known art on the High Five in Dallas cost $1.3 million, or one half of one percent of the total project budget.

There are more than two dozen public art projects underway as part of Oklahoma's mandate, totaling just over $5 million. The artwork on the Interstate 44 project near Tulsa's Hard Rock Hotel and Casino is costing ODOT half a million dollars. The art on the sound barrier along Tulsa's Creek Turnpike is worth more than $400,000. Plus, the Interstate 35 corridor in Norman will be completely transformed with art on eight bridges. Combined, those projects will cost ODOT nearly $2 million.

"I can absolutely promise you that by the time we get those bridges completed, people will come here specifically to see that," said Williams.

In fact, Williams says, Oklahoma could put itself on the map with public art, pointing to Chicago's public art display at Millennium Park. An economic impact study predicts it will bring more than $2 billion to the city in the next ten years. There are no studies predicting what the economic impact of Oklahoma's art will be, but Williams predicts it will be significant. She says the public art will add to the quality of life in Oklahoma which is good for residents and for recruiting businesses to the state.

"We are a tangible sign of Oklahoma's unique history and spirit," said Williams.

Speaker of the House designate Kris Steele said he supports public art, but added another statement.

"Current budget constraints warrant a review of this law so we can continue to provide the core government services upon which Oklahomans depend every day," said Steele.