Conference Committee Process: Do Oklahoma Lawmakers Use It Or Abuse It? 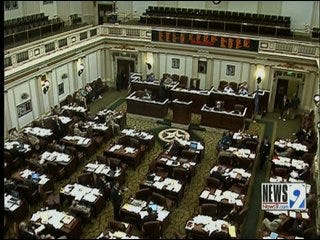 OKLAHOMA CITY -- Within the Oklahoma Legislature, rank and file lawmakers call it 'a horrible way to govern.' Even those in leadership roles admit reform of this process would be welcome.

The conference committee process is a tool that clearly can be used for legitimate ends -- reconciling differences between House and Senate versions of the same bill, most notably.

But there is another use -- or, perhaps, 'abuse' -- that has recently caught the attention of, not only certain law-makers, but also law enforcement.

Oklahoma District Attorney David Prater is investigating the allegation that a small group of lawmakers conspired to pass legislation that would potentially benefit them personally. Prater believes the conference committee process is what allowed these lawmakers to get the legislation approved.

Two bills approved on May 28 (the final day of the regular session), provided for the creation a new $80,000 job in the State Medical Examiner's office. One of the lawmakers under investigation, Sen. Debbe Leftwich, D-Oklahoma City, was allegedly promised that position, if she would agree not to seek re-election. Another lawmaker, Rep. Mike Christian, R-Oklahoma City, was allegedly going to abandon his House seat in order to run for Leftwich's vacated seat. Rep. Randy Terrill, R-Moore, is believed to have devised the alleged scheme and led the effort to insert the necessary language into the bills. (The bills were both vetoed by the Governor, who said both the position and the expense could not be justified.)

All three lawmakers have asserted their innocence in the matter. But, innocent or not, the question is -- how did the legislation get through, without any colleagues raising an objection?

"I can entirely see how something like that passed and folks didn't think a thing of it," said Rep. Ryan Kiesel, D-Seminole.

Representative Kiesel, who is voluntarily stepping down from his seat after three terms, says it's hard to monitor the content of bills that get assigned to a conference committee, as these did. A big reason, he says, is because most of the committees don't actually meet.

"Oklahomans should not mistake the word 'committee' in that name as [suggesting] a meeting of individuals that come together," Kiesel explained. "No, it's a piece of paper that has signature lines on it."

Indeed, the author of a bill that's been sent to a conference committee needs only get signatures from a majority of the conferees assigned to that committee in order to bring it back for general consideration -- there is no actual meeting at which changes to the bill are detailed and debated.

Kiesel says such a system allows an unscrupulous legislator to insert new, possibly self-serving language into his or her bill and then use personal or political persuasion to get a sufficient number of conferees to sign off on it.

And if that happens right at the end of session, when lawmakers are typically overwhelmed with dozens of other bills, Kiesel says, any notion of real legislative transparency is "out the window."

He's not alone in that view.

Rep. Reynolds, a self-proclaimed watchdog for the taxpayer, calls it "absolute insanity," especially the last two days of session. Because that's when the rule requiring a 24-hour wait before bills can be considered goes away, and the conference committee substitutes start coming fast and furious.

"And you have five minutes to read a 100-page bill, as if anybody does," Reynolds said, "and [the bills' authors] just say, 'trust me!'...and we vote on them and that's where the worst legislation occurs."

In the final week of session this year, the House took up 183 bills, compared to 50, 22, and 35, respectively, in the three weeks prior. They handled 86 bills the last two days alone.

One of those, House Bill 2359, Reynolds says, is a perfect example of how the system fails the citizens it's intended to serve. HB 2359 was first introduced in February as a simple 2-page bill to clarify language surrounding the teacher retirement fund. It ended up in a conference committee where, eventually, it was completely rewritten, re-emerging as a lengthy, $80 million sales tax measure. Reynolds says he and his colleagues should have been given ample time to read and debate such a bill.

"The first time it was ever published publicly was, I think, 1:45 in the afternoon on the last day of session," said a disbelieving Reynolds. "A 100-page bill -- never seen the language before, brought up for a vote an hour later, brought up for a vote in the Senate thirteen minutes before they had to legally adjourn."

The bill passed both houses easily.

Reynolds and other lawmakers say the current system makes it virtually impossible for even the most diligent among them to cast informed votes at the end of session.

"I have three masters degrees," stated Rep. Lucky Lamons, D-Tulsa. "I cannot comprehend all that information; I'm educated, but it comes too fast."

But Prater, the Oklahoma County D.A., says that's exactly what some at the Capitol count on. He says a lobbyist confronted him recently and told him his investigation threatened to put an end to the "chaos" that he and other lobbyists rely on to get certain language into law. The lobbyist called the lack of transparency in the conference committee process a good thing.

"Yeah," Prater repeated, "this lobbyist said, 'well that's actually good -- it's good for my clients, because the lawmakers that we work with can get the language inserted into those bills and we can get 'em through the process, without anyone knowing that language is in there.'"

When the D.A. told the man this sounded dishonest, Prater says, the man responded, 'No, it's not dishonest, it's just business.'

Legislative leaders say the system isn't nearly as bad as some would suggest.

In a statement, outgoing House Speaker, Rep. Chris Benge, R-Tulsa, defended the conference committee process, saying he introduced several reforms to make it more transparent. Still, he acknowledged that the arguments surrounding it "are both legitimate and ever-evolving."

The outgoing leader of the Senate, President Pro Tempore Glenn Coffee, R-Oklahoma City, declared that the process is more transparent now than it has ever been, and said he's not aware of attempts by any lawmakers this session to slip through any inappropriate language.

"I would say, when I first came here, I saw some of that," said Sen. Coffee. "I think there's very little of that occurs now."

Still, the man designated as the next Speaker of the House, Rep. Kris Steele, R-Shawnee, told us he wants to make further reforms, including requiring conference committees to actually meet, and keeping the 24-rule intact, even through the session's final hours.

Those not in leadership say both measures are needed. They say, right now their only defense is to stay vigilant and try hard to spot suspicious language as the conference committee substitutes fly by.

"It's like playing Where's Waldo," laughed Rep. Kiesel, "which, I suppose, is fun for your kids in the back seat on a long car trip. But it's not a good way to run your state government."

Amelia Mugavero A Tulsa woman is leading a movement to give mental health services to people who say they are being affected by racial injustice.
View More Stories