Tulsa Dogs Being Adopted In Denver 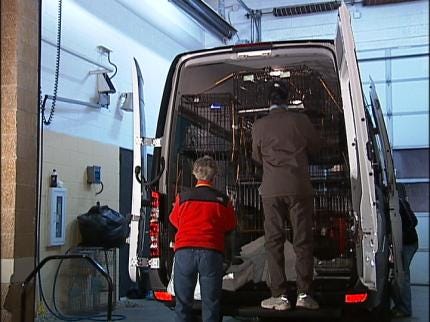 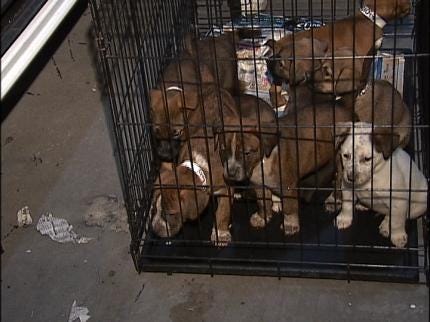 By Jennifer Loren, The News On 6

TULSA, OK -- Almost 30 dogs from the Tulsa Animal Shelter arrived in Denver on Tuesday night waiting to be adopted.  Believe it or not there is actually a shortage of dogs up for adoption there.

The dogs' rescuers came to Tulsa in the middle of the night and took as many as they could fit in their van.  The Denver Dumb Friends League has two shelters in Colorado, where they say all of the dogs will stay until each one finds a new home.

"We'll send anything we can, anything that they'll accept we're going to try to get out of here to give them a second chance," said veterinarian, Dr. Cathy Pienkos.

One by one the Tulsa dogs are plucked from death row and loaded into a van that will take them to a better place.  At the plush shelters in Denver, they adopt out almost 15,000 animals every year.

"They have a very high demand for dogs. They don't have enough dogs to fill the demand of their adopters," said veterinarian, Dr. Cathy Pienkos.

Tulsa, on the other hand, has a surplus of animals that are not adopted.

Last year, the Tulsa Animal Shelter saw more than 18,000 animals come through its doors.  Only 2,200 were adopted.

"So I think a lot of people are able to do the math and those others were unfortunately probably having to be euthanized," said Millicent Adu-H'Torah with the Tulsa Animal Shelter.

That's almost 16,000 animals that were killed because no one wanted them.

But, the dogs going to Denver will get a second chance at life.  Volunteers took all the puppies they could get.  They took white dogs, Labradors, any dog they thought to be adoptable.

They were stacked in cages for a long, over-night trip to the Rockies and then home.

"So we are trying to get those dogs shipped out there and hopefully they'll all be in new homes by the end of the week. Hopefully," said veterinarian, Dr. Cathy Pienkos.

The trip was the second from Tulsa to Denver for the group.  All of the dogs from the first trip were adopted within a week.

Many people probably want to know what Denver is doing right to have a shortage of adoptable dogs.  They say they are much more proactive in their spay and neuter efforts than Tulsa's shelters.

Tulsa Dogs Being Adopted In Denver