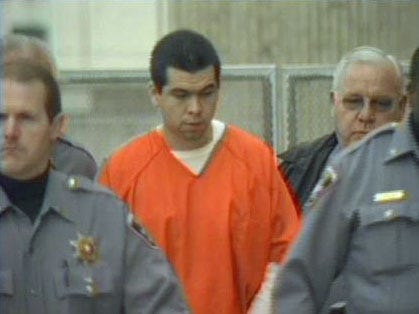 NORMAN, Okla. (AP) -- An attorney for the man convicted and sentenced to die for the murder of a University of Oklahoma dance student from Arkansas wants a new trial.

Attorney Michael Morehead told the state Court of Criminal Appeals Tuesday that Anthony Castillo Sanchez was wrongly shackled and forced to wear an electronic shock device during the trial.

Sanchez is appealing his 2006 convictions in Cleveland County in 2006 on first-degree murder and rape charges for the December 1996 death of Juli Busken of Benton, Arkansas.

Assistant District Attorney Jennifer Strickland argued for the state that the jury never saw the shackles or the shock device so Sanchez suffered no prejudice.

Morehead says even if the jury never saw the restraints Sanchez suffered mentally, causing him to lose the ability to aid attorneys in his defense.