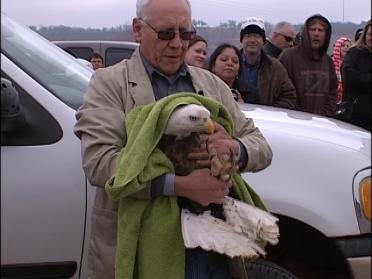 A 4-year-old southern bald eagle is back in the wild.  The female bird was released this weekend near the Keystone Dam.

The bird had been shot in late November but the bullet did not hit any vital organs.  The bald eagle spent the last three months being rehabilitated by the Iowa Tribe of Oklahoma.

"We believe the eagle is the only one that has seen the face of the creator. So it is very important for us to do rehab, get those birds well and get them back out into the wilds where they belong and, hopefully, they'll carry that message back to the creator and He'll bless our people," said Victor Roubidoux with the Iowa Tribe.

It is believed there are around 65 nesting pairs of southern bald eagles in Oklahoma.