``I just want to come out and be aggressive and try to attack the whole game,'' said Elder, who scored 22 points against UConn, reaching double figures for the 29th time in his last 33 games.

And about that best kept secret business?

``I was teasing him last week,'' the coach said, preparing him to face UConn's Ben Gordon. ``I said, `You're going to go out and play against one of the best 2-guards in the country and I expect you to go out there and outplay him.'''

Elder followed orders, limiting Gordon to nine shots and 13 points. As his reward he gets to face Texas Tech in the title game. The Red Raiders practice defense first because coach Bob Knight believes games are won and lost in their own end of the court.

``You have to start with defensive play,'' Knight said. ``If you don't have good defense, then you've got to score two buckets for every one you give up. It's usually defense that's enabling the offense to get a lead.

``So what I've tried to do, with varying degrees of success, I've tried to make sure that our defense is something that enables our offense to win a game.''

Coaches are fond of saying that they don't know much about their teams at this stage of the season. Hewitt and Knight learned a little bit more in their semifinal wins.

Hewitt found out that Georgia Tech won't be intimidated by fancy rankings and that Elder and Isma'il Muhammad, who also had 22, can be big-time scorers for him. He knows his team will only get better when Arizona transfer Will Bynum becomes eligible next month.

Knight learned that Texas Tech can deal with deliberate teams like Utah and play defense up to his high standards.

``We can do some things that make it difficult for you to run and we had been a team that in our first couple of ballgames really pushed the ball up the floor,'' Knight said. ``I didn't think we'd be able to do that (against Utah) and I was very interested in seeing how our team would react, particularly on the defensive end in a patient game. I thought we reacted pretty well.''

So did Georgia Tech, running with abandon and taking advantage of a sub-par Emeka Okafor, who was hobbled by an aching back that limited him to nine points.

Hewitt knew the Yellow Jackets had caught a break with UConn coming out flat, seemingly disinterested in defending that top ranking.

Against Georgia Tech, the Huskies were somewhere else.

``They imposed their will on us,'' Connecticut coach Jim Calhoun said. ``That's something we try to do upon other teams. I have to say I'm more than the most-surprised guy in the building, just how we didn't respond. To me, it's about will and toughness. You have to respond better than we did and we didn't respond very well at all. It scared me.'' 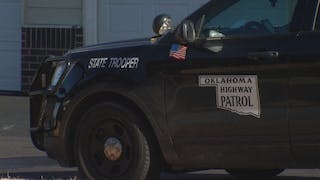 Drake Johnson A man driving a motorcycle is dead after crashing in Wagoner County on Saturday, according to the Oklahoma Highway Patrol (OHP). The OHP said Ryan Corey Ward, 47, was pronounced dead at the Wagoner City Hospital due to injuries suffered in the crash.

Drake Johnson One person is dead after a crash in Creek County Saturday afternoon, according to the Oklahoma Highway Patrol (OHP). Troopers said Norman Hill, 59, was pronounced dead at the scene of the crash by Creek County EMS.