Annan, whose second five-year term ends on Dec. 31, said the past decade had seen progress in development, security and the rule of law _ the three great challenges he said humanity faced in his first address to the General Assembly in 1997.

But the secretary-general said too many people are still exposed to brutal conflict, and he warned the fear of terrorism has increased a clash of civilizations and religions.

Terrorism is being used as a pretext to abridge or abrogate human rights, and globalization risks driving richer and poorer peoples apart, he said.

``The events of the last 10 years have not resolved, but sharpened, the three great challenges I spoke of _ an unjust world economy, world disorder, and widespread contempt for human rights and the rule of law,'' Annan said. ``As a result, we face a world whose divisions threaten the very notion of an international community, upon which this institution stands.''

Yet, he said, this was happening at a time when ``more than ever before'' people around the world have come together in a single society and the challenges are global.

Annan opened a meeting in which heads of state and ministers from the 192 U.N. member states face the need to tackle some of the world's most difficult issues: suspicions about Iran's nuclear program, the humanitarian crisis in Darfur, the Middle East peace process.

President Bush, who shook hands with Annan before going into the General Assembly, was to promote his so-called freedom agenda in his speech later Tuesday. He will focus on democratic reforms in Iraq, Afghanistan and Lebanon and elsewhere in the Middle East.

``Sometimes the advantage of having everybody together is that you can spend day and night thrashing out the details,'' David Triesman, the British Foreign Office's minister for Africa, told reporters after a Security Council meeting on Sudan Monday.

Over a week and a half, each nation is allotted 15 minutes at the General Assembly hall's dais to deliver a speech about the issues most important to them. Yet the session is always more about the meetings that orbit these speeches rather than the speeches themselves; and this year, the focus will be Iran's nuclear program.

Shortly before coming to New York, France's President Jacques Chirac proposed a compromise to kick-start talks between Iran and the international community, suggesting the threat of U.N. sanctions be suspended in exchange for Tehran halting its uranium enrichment program.

``I don't believe in a solution without dialogue,'' Chirac said in an interview with Europe-1 radio.

A U.S. official, speaking on condition of anonymity because no decision has been made, said European and Iranian diplomats might meet on the sidelines of the General Assembly in hopes of easing the nuclear standoff.

At a literacy event hosted by Laura Bush on Monday, Bush explained why he comes to the General Assembly session.

Though Bush will be at the U.N. around the same time as Iranian President Mahmoud Ahmadinejad, it's certain that he won't take up the hard-line leader's offer of a head-on debate; they probably will not even shake hands.

The likelihood of a chance meeting is remote. The Secret Service is responsible for guarding all foreign dignitaries on U.S. soil, and they will all be wired into the same network to make sure the two don't cross paths. But both are invited to a lunch Tuesday hosted by Annan, and every year there is a photo of all the heads of delegation.

Aside from the big issues, the debate gives the opportunity for the world's smallest nations _ Palau, Liechtenstein, and Suriname, for example _ to share the stage with the United States, Iran, China and India.

The undercurrent of this year's debate will be the race to succeed Annan, whose second and final five-year term expires on Dec. 31. The candidates were already making appearances Monday, and many more were planned.

The General Assembly also gives reporters an easy opportunity to get at the leaders they've been chasing for months. Among those who will give news conferences will be Omar al-Bashir, the president of Sudan, Ahmadinejad and Venezuelan leader Hugo Chavez. 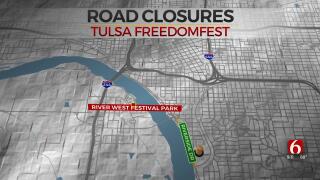 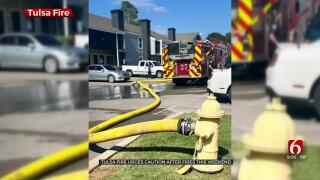 News On 6 Tulsa firefighters are reminding everyone to stay safe during the hot weather after putting out an apartment fire on Sunday. The Tulsa Fire Department said crews responded to a fire that had spread to the roof of a two-story apartment Sunday afternoon. 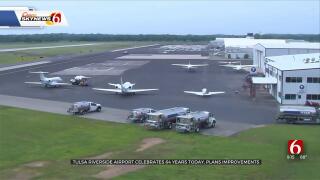 News On 6 The Tulsa Riverside Airport is planning for major upgrades, just in time for its 64th anniversary. The airport opened July 3, 1958, and had just one runway, aircraft ramp and concrete building. 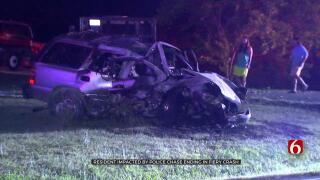 Kaitlyn Deggs Witnesses say multiple people were hurt after a police pursuit that ended with a fiery crash in a Tulsa neighborhood. One witness said he heard the crash and came outside to find the car on fire with two people inside. 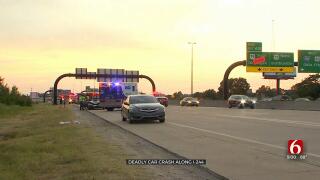 News On 6 News On 6 is following breaking news on a deadly Tulsa car crash. This happened around 8:30 p.m. on I-244 near Utica. 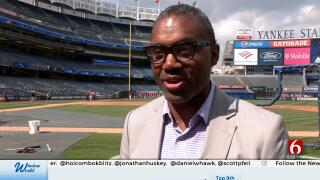 News On 6 Former Tulsa linebacker Brian Smith, who was a member of the 1991 Golden Hurricane team that won 10 games, is right at home with the New York Yankees. Smith took an internship with the Yanks and is now beginning his 30th year with the franchise serving as senior vice president and focusing on corporate and community relations.
View More Stories