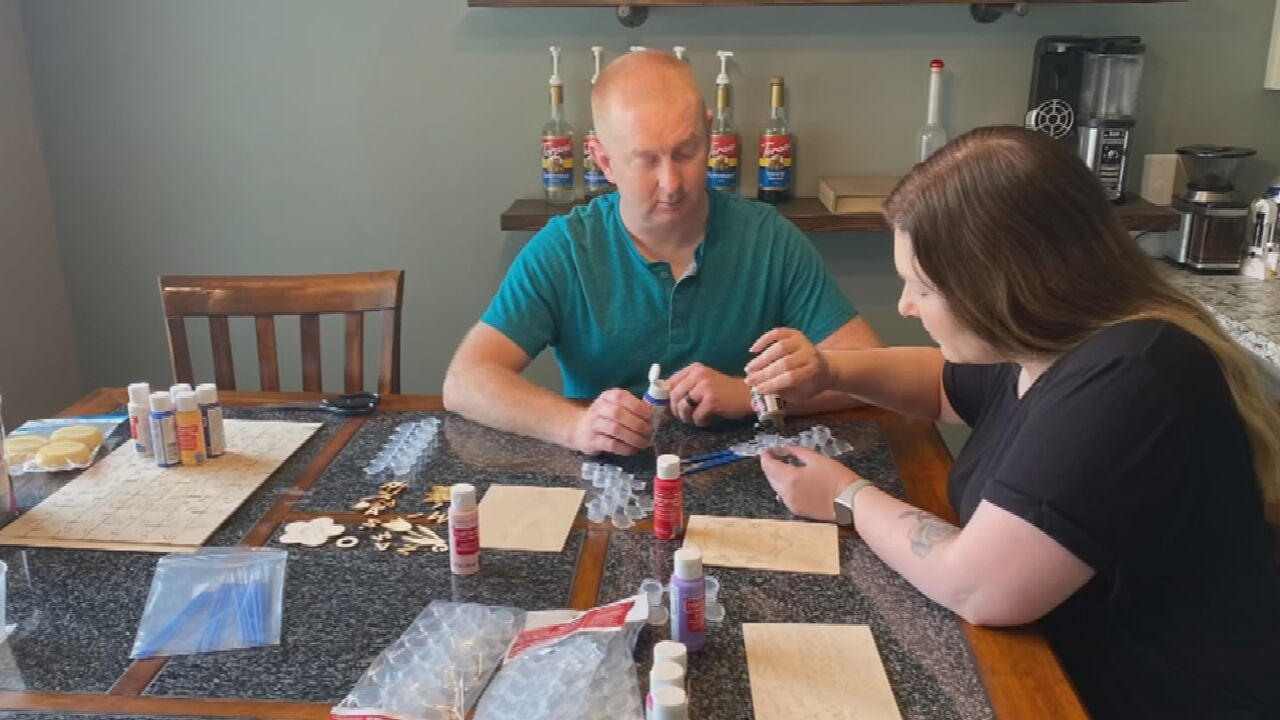 Sara Williams and her family had their world flipped upside down, weeks before COVID-19 was even reported in Oklahoma.

"Whirlwind is a good word for it," said Sara. "My dad got sick very suddenly, very unexpected. He checked himself into the hospital one day and passed the next."

At just 54 years old Sara's dad, Christopher, was gone. He left behind four daughters and his wife Melissa.

"It was just really out of the blue and I mean it was like our income was gone," Sara said.

With no idea what to do, where to turn or how to make a living, the family came together. It was in their grief, their darkness, a light went off. That light turned into a spark and the spark ignited an idea and Berea Company was born. 100 percent hand-poured soy candles the family makes right in their kitchen.

"We noticed nobody did wooden wicked candles," said Sara. "Right now we probably fill between five to ten orders every day."

Clarence and his wife Missy are also working from home, creating unique items on and out of wood.

"We make earrings, all kinds of home decor, we do like farm signs and just other - we like to find unique pieces of wood and engrave a picture on those so it's like a one-time thing," Missy said.

The Shaw’s started out exclusively on Etsy and have now expanded to their own website.

"We've been forced to be a lot more creative than we used to be," Clarence said. "How can we have some lower priced products and some products that can help those homeschool their kids that have never had to do that before."

Two families who've never met, but now share something in common. They both responded to the same Facebook post. It was an invitation to set up shop and sell their items at Bixby's 181 Ranch when the pandemic passes.

"I was just thinking about everybody and what I can do and I have this big space and it really is a passion of mine being able to showcase small businesses and give them a place to get in front of people," said 181 Ranch Owner Sara Fry.

As a small business owner herself, Fry is also navigating through uncertain times. She's had to reschedule weddings, cancel birthday and anniversary parties and next month's Rummage at the Ranch, which brings in thousands of people will likely be canceled. Those challenges motivated Fry to invite others to use her space and the response has been overwhelming.

"All of a sudden my phone just exploded," Fry said. "I was getting messages and friend requests and Facebook comments. I finally had to turn all of the notifications off because it just got more than I could handle all at once, which is great. The interest is there, the need is there."

Sara and Melissa have no marketing budget, so this is a break they need.

"I think it will be a great eye-opening experience to see if this is something we want to keep small," said Sarah. "Is this a just between friends kinda thing or if going out and getting booths and renting little areas to sell in bulk to see if it's really worth it for us. So I'm excited."

As for the Shaws, it's a chance to come together with other small business owners.

"It's always great to make new contacts. So I'm really excited about it. I think it's going to be great," Missy said.