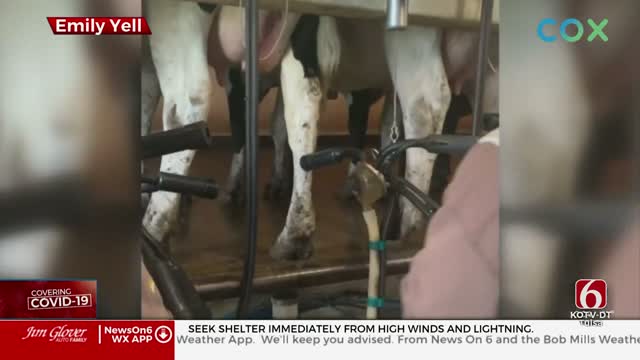 ADAIR COUNTY, Okla. - A dairy farmer in Adair County said she may have to start dumping milk, since demand is so low right now because of COVID-19.

The family said they are losing about $700 a day.

Yell Brothers’ Farm, which used to be called Spring Valley Dairy, has been around for four generations. Dianna Yell said there were about 20 dairy farms in the Adair County just a few years ago, but farmers have struggled to make enough money and now there are only a handful.

"We've done this for so long it's kind of like, what else do I do? You know I love what I do,” Yell said.

Now, with COVID-19, things are even worse.

Monday’s rate for selling milk per hundred pounds to dairy companies was $11.31, the lowest she's ever seen.

The nearly 200 cows on the farm are milked twice a day, and they must keep being milked, or else the animals will get sick. She said she was recently warned by Dairy Farmers of America, the company she contracts with, that dumping her milk instead of selling it could become a reality.

The outlook on the future has the family considering making changes on the farm.

“Talked about planting strawberries. Planting corn, planting tomatoes, doing a farmer's market type thing. Just anything, you know, to try to compensate to help us out to keep this dairy going,” Yell said.

Until she decides whether to put something new in the ground, she'll be taking it one day at a time.

"We've never had to deal with this issue before so we're really, we don't know,” she said.

Yell said farmers have always been resilient and while this is new, challenging territory for her family, she is still hopeful they can become a fifth-generation farm one day.

Yell said she would donate the milk if she could, but it must be processed and she is under a contract with the milk company, which decides where the milk goes next after receiving it.