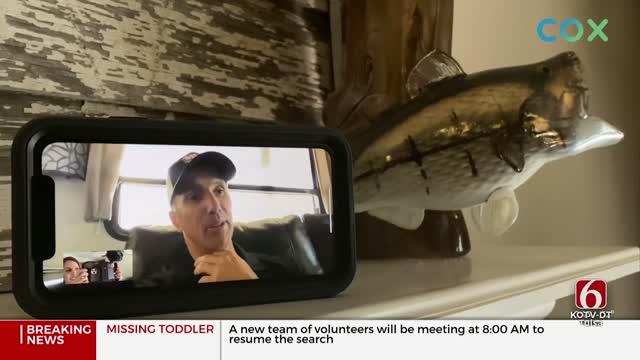 The Coronavirus has forced sports nationwide to shut down, including Major League Fishing, but the MLF says there's finally light at the end of the tunnel.

It's been nearly 2 months since the pros have competed in an MLF tournament. This is normally one of the busiest times of year them, but even though the pros aren't competing, you better believe they're still fishing.

Champion angler, and Oklahoma's Own, Edwin Evers misses competing, but he's not complaining much because he's spent the past 6 weeks on the water fishing with his son and family.

“I'd never trade this time that I've had at home. The month of April, we're never home. I've never been able to be home March and April. I'll always remember this,” said Evers. “It's a bad, bad thing that's going on, but man, I sure have enjoyed my time here at the house and with the family.”

It’s not just the pros getting our on the water, Evers said he’s noticed lots of folks taking up fishing to fill their free time.

“If there is a bright spot in it, I've never seen more dads and moms and kids out on all of our Oklahoma lakes fishing right now it's just awesome,” he said.

Once the tour picks back up, Evers will compete to qualify for the MLF's REDCREST Championship, which will take place on Grand Lake in February 2021.

“Tulsa is just such a great community that just loves bass fishing and it's gonna be really, really neat to have it here and have it on Grand,” Evers said. “But I've got my work cut out for me. I need to make sure I make it. I don't ever want to take that for granted, I still need to qualify for it, but I'm really looking forward to it.”

He says having the championship on his home lake adds pressure, especially since he won big on Grand Lake in the 2016 Bassmaster Classic. But at the end of the day, pressure is what he wants.

“I love pressure and competition because it brings out the very best in me. It’s what I love about tournament fishing,” said Evers.

Evers says he expects the MLF tour will pick back up at the end of the month or beginning of June.

The MLF says it will announce a start back date soon.

If you need a fishing fix sooner, Evers will be featured on the Outdoor Channel this Saturday. He’s going up against fellow Oklahoma Native and pro angler Jason Christie in the Patriot Cup. It was filmed on Fort Gibson Lake in the fall, but the results won’t be revealed until this weekend.