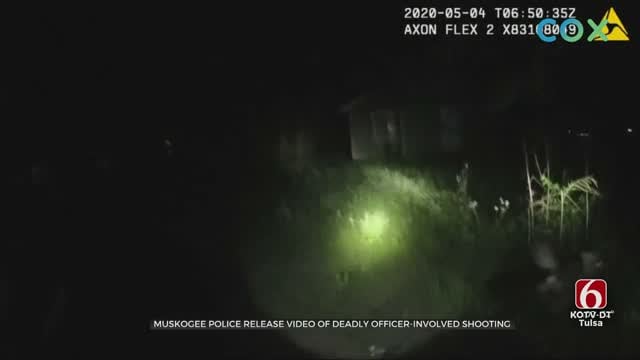 MUSKOGEE, Okla. - New bodycam video from Muskogee Police shows the moments leading up to when officers shots and killed a Tulsa murder suspect on Monday.

Police said Demontre Bruner ambushed six officers who were looking for him, and they fired back.

Police said an anonymous caller let them know Demontre Bruner was at a house in Muskogee. When an officer drove by that home, Bruner ran off into the dark.

Bodycam video shows officers using a K9 to track Bruner after another caller told them Bruner was armed and planning to return to Tulsa to kill his uncle.

They searched the block near Freemont and South 12th Street before moving to 11th.

A couple minutes later, video shows Bruner firing shots at the officers as they came around the corner.

You can see the muzzle flash from next to an AC unit where Muskogee PD said Bruner was laying down hidden in the weeds.

"You saw the big tree that the K9 officer got behind, that was this tree that you can see in the corner of the yard," Muskogee Police Deputy Chief Chad Farmer said.

Farmer said Bruner fired three shots at the officers. None of them were hit. Two officers fired back.

"Our response is dictated by what the suspect does. If he would have yelled at us, we would have taken some cover and negotiated with him. But he shot at us and didn't really give us a choice," Farmer said.

Farmer said officers tried to talk to him several times. When it was safe for officers to get closer, they took his gun and paramedics tried to save his life.

Bruner died at the hospital a few hours later.

"Obviously this was not the result any of us wanted. I've talked to the officers that were there last night, and to quote one of them; I didn't want to kill this guy, I just wanted him to stop shooting at us," Farmer said.

He said the six officers involved were put on routine administrative leave during the investigation.

Epic Charter Schools’ Board Calls For Due Process After State Audit