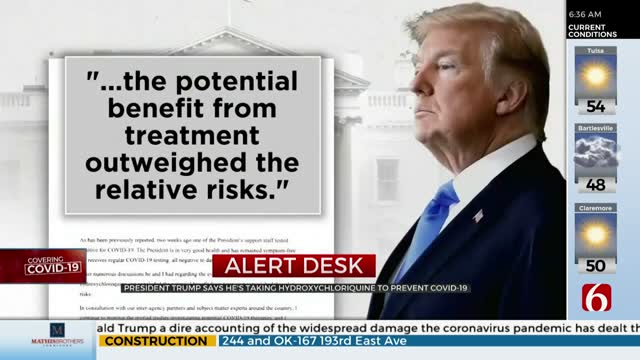 The President isn't reportedly showing any Coronavirus symptoms but is being tested often and he says he consulted with his doctor at the White House and is taking hydroxychloriquine.

“So I'm taking the two; the zinc and the [Hydroxychloriquine], and all I can tell you is so far I seem to be OK” said President Trump.

A memo from the White House physician said the potential benefits of the drug outweigh the risks, but it didn't actually state the President was taking the medication.

Back in March, the president touted the medication as a game changer while Democrats are calling the President's action reckless.

"He's our President, and I would rather he not be taking something that has not been approved by the scientists, especially in his age group and his, shall we say, weight group, morbidly obese they say. So, I think that it's not a good idea,” said House Speaker Nancy Pelosi.

Last month, the FDA warned against taking it outside of a hospital and not to take it to prevent disease because it can cause heart problems.

First COVID-19 Vaccine Approved In US By FDA