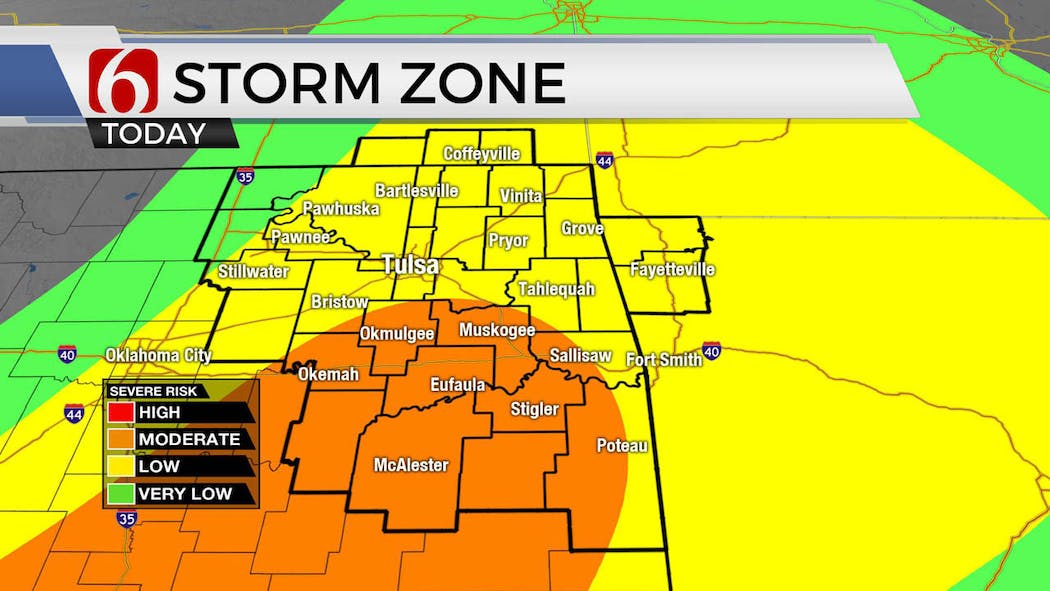 We’re tracking a complex of storms this morning moving across southeastern Kansas and northcentral OK with a history of damaging winds from 60 to near 80 mph.  This complex is likely to move across part of northeastern OK during the morning hours with a continued threat of strong to severe storms. Later today, our atmosphere will reload with increasing moisture and instability that may allow for strong to severe storms this afternoon and evening with all modes of severe weather potential along and south of the outflow from this morning’s complex. Most of the weekend appears warm and humid with chances for storms, but the current timing means Saturday appears mostly dry and muggy with afternoon highs in the mid-80s. A heat index value Saturday could reach the lower 90s. A few storms may be possible late Saturday night into Sunday morning, but higher chances will arrive Sunday evening into Memorial Day as a front enters northwestern OK and advances southeast into our area with showers and storms. Some may produce heavy rainfall and there will be low-end probability for strong and severe storms. The active weather pattern should also continue for most of next week as a cut-off low develops to our south with a moist airmass remaining across central and eastern OK. The main western U.S. trough has already deposited a few small disturbances rotating around the base and across the southwesterly upper flow. This is partly responsible for our storms that we’re tracking this morning. Additional forcing is likely to arrive later this afternoon even though stronger flow is more north into the central plains. Deep layer shear will increase some later this afternoon. Convective and potential energy is also expected to increase to moderate levels across northeastern to east-central Ok later today with southeast surface winds advecting higher dew point temps into the region. The location of afternoon and evening storms will be directly related to the eventual resting position of an outflow boundary from this morning’s complex. This will more than likely be located near or south of the I-40 corridor. Regardless, the threat for additional severe storms will remain later today and this evening, mostly across southeastern OK, where all modes of severe weather will be possible.

The rest of the weekend remains active, but higher chances will hold-off until Sunday evening into early Monday morning as the frontal boundary arrives from the northwest with a rain and storms. The main threat for Sunday evening would be some damaging winds before transitioning to heavy rainfall threats into Monday morning and midday. By afternoon Monday, a new upper level feature may be developing across central to north TX in the form of a cut-off area of low pressure. This feature may remain nearby for a few days next week which would keep northeastern OK in a humid airmass with limited instability. The result would be daily shower and storm chances with slow moving cells resulting with increasing flood potential. Temps would stay in the upper 70s and lower 80s early next week, but as the airmass will remain, muggy weather would also remain likely.

Please remain aware of your weather surroundings this morning and later today.