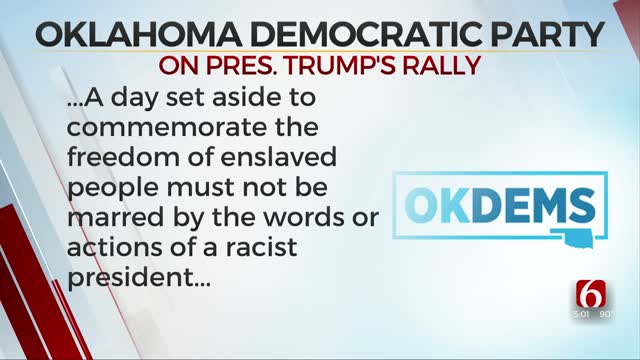 They also announced they will be holding a news conference in Tulsa’s Greenwood District on Friday, June 19.

Alicia Andrews, Chair of the Oklahoma Democratic Party, said “For him to host a campaign rally on Juneteenth in Tulsa is unconscionable. A day set aside to commemorate the freedom of enslaved people must not be marred by the words or actions of a racist president.”

Andrews pointed to the history of racism in Tulsa and the significance of the rally’s scheduled date. “He is coming here on the 99th anniversary of one of the very worst racist massacres ever on American soil. The Oklahoma Democratic Party stands with all people of goodwill to denounce this self-serving morale-booster for Trump,” said Andrews.

The news conference on June 19 will be held in the historic location of the 1921 Tulsa Race Massacre.

The Oklahoma Democratic Party said more information will be announced soon on the specific location and time of the news conference.