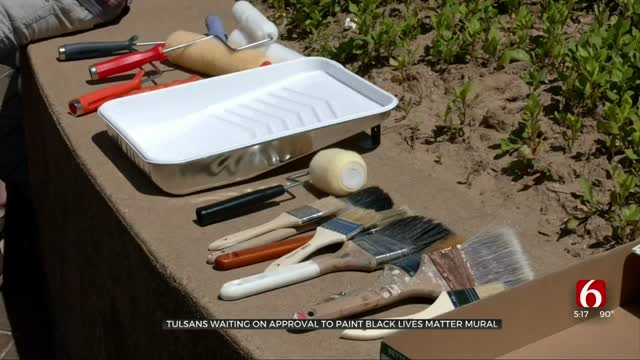 Members of the Tulsa community seek the City of Tulsa’s approval to paint the words “Black Lives Matter” as a mural on 1st street near Denver Ave. The group tried to begin painting Wednesday but they were stopped by Tulsa Police and told they didn’t have the proper permit to paint on the street.

They said they want this mural to be a permanent reminder of change so that the events in the wake of George Floyd’s death don’t slip into the distance. They said painting history is proving harder than they thought as they can’t quickly get a permit.

“What we see is that other cities have expedited a conversation about the urgency and necessity of being able to do a community project like this,” project organizer Kolby Webster said.

Webster said all they want is for city officials to listen. “We are all Tulsans, we deserve to put our message down, we tried to do something the least confrontational that we thought we could do, and that’s still not allowed I suppose,” Webster said.

News on 6 reached out to city officials for a statement on the idea of the mural and the permit process, but they have not gotten back to us.

Webster’s group isn’t the only one trying to paint a mural, two other groups are talking about the possibility of putting one at Greenwood and Archer, 1st and Denver, or along Denver itself in front of the BOK Center.

The groups said they will not stop fighting for their right to put a mural on the streets of Downtown Tulsa and will not be silenced.