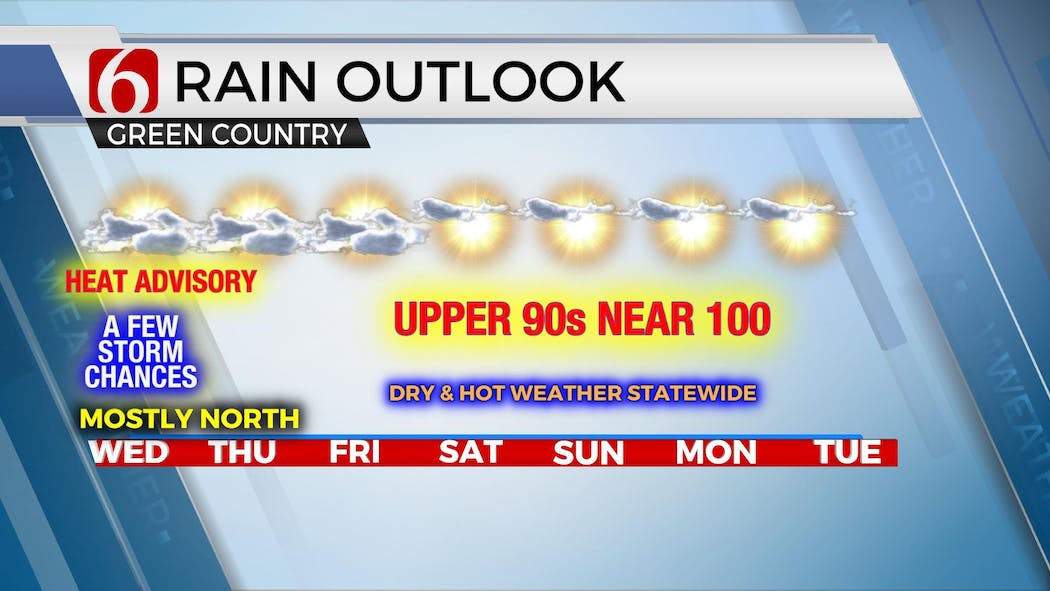 A few showers remain possible again this morning across eastern OK, including the Tulsa metro into southern Kansas for the next few hours, but will end quickly this morning. Highs this afternoon will reach the mid-90s near and south of the metro. Another heat advisory will be required from Tulsa south.

A cluster of strong to near severe storms moved across northwestern OK early this morning and has ejected across south-central Kansas. While this forcing remains slightly north, some activity trailing to the south will remain possible for a few hours. A weak surface front will move southeast later today and stall near or slightly south of the Tulsa metro bringing another chance for a few storms near or north of this front later tonight into early Thursday morning. Any storm activity that develops during this period north of the boundary overnight could be severe with wind and hail the main threats, but chances will remain mostly west or north of our immediate areas of concern. Later today, locations south of this approaching boundary, including the metro into southeastern OK will be in a position for more high heat index values as low-level moisture pools near and south of the boundary. Combined with recent rainfall and green vegetation, dew points may be in the upper 70s near 80 in a few local regions. While most of the heat index values will be in the 105 to 110 range, some very localized spots may move slightly higher creating excessive heat stress issues through the afternoon. As noted above, this front will lift north or become diffuse either Thursday afternoon or evening as a mid-level ridge of high pressure southwest of the state finally begins expanding northward. This will take the zonal flow along the state line region more north for the weekend bringing hot and dry weather across the state. The exception will be in a small area of extreme southeastern OK to western Arkansas where local terrain combined with moisture can help to create a few daily afternoon storms. This is very common for this time of year across extreme eastern OK and western Arkansas.

In summary, a few showers will remain possible this morning and again early Thursday morning near and north of the metro. The heat advisory remains from Tulsa southward this afternoon.

News On 6 A Pattern Of Pleasant Weather Underway

News On 6 A Pattern Of Pleasant Weather Underway

A Break From The Heat Arrives For Northeastern Oklahoma This Weekend

Alan Crone The cold front is south of the metro, but the upper level trough will remain nearby for the day bringing some morning showers before thinning out midday to early afternoon. Cooler weather will remain, with highs only in the upper 70s to lower 80s this afternoon.