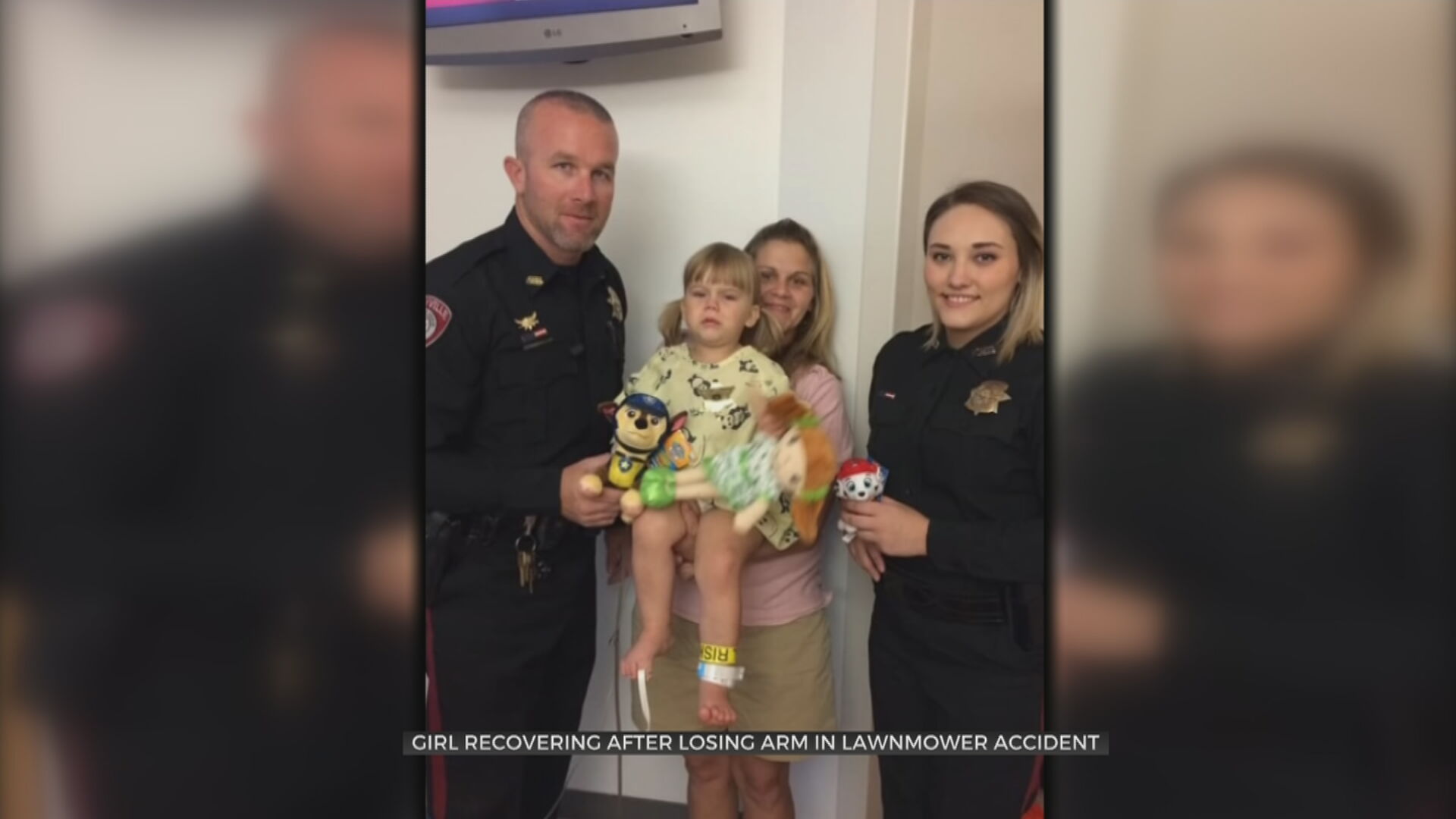 A Green Country toddler has had surgeries and will need even more after losing part of her arm in a lawnmower accident.

Her family said first responders in Kellyville saved the girl’s life right after the accident by applying a tourniquet perfectly.

Mackenzie Woods' parents describe her as strong-willed and vibrant. They hope she'll be able to play softball one day with the help of a prosthetic arm. Mackenzie went through two surgeries and two blood transfusions this week. Her parents said she has another surgery scheduled for Friday.

"She has just taken this like a champ,” Miracle Woods, Mackenzie’s mother, said.

Miracle said Mackenzie wanted to hop on her grandparents' lawnmower for a ride this weekend, when the family said she tripped. Part of her right arm was amputated.

"I try to look at my glass as half full. My daughter is still alive. She's left-handed, not right-handed,” Miracle said.

The accident happened right down the road from where Kellyville Assistant Police Chief Dustin Tiner lives. He heard the call go out, showed up on his day off, and learned the ambulance was still in Bristow.

"So instead of waiting there, because it's several miles down on a gravel road, I just decided to go ahead and put her in my car,” Assistant Chief Tiner said.

Tiner said he held on to Mackenzie, putting pressure on her wound, while driving. But he said the ambulance took a wrong turn while trying to meet up with him. The fire department was also responding and firefighter Mikayla Staiger ended up on the same road as Tiner.

"She was a fighter. She did really good,” Staiger said.

Staiger, who is also an EMT and police officer, sat in the backseat with Mackenzie, where Tiner's K-9 officer would have been had he been on duty. The family said doctors told them the tourniquet Staiger put on Mackenzie's arm prevented her from bleeding out.

"This is honestly my first time applying a tourniquet,” Staiger said.

The team then met up with the ambulance. Staiger and Tiner got to visit Mackenzie in the hospital last night.

"I hugged Mikayla so tight last night because I can never repay any of those people for what they've done for us," Miracle said.

The first responders in Kellyville encourage people to take a class to learn how to put on a tourniquet - and say the key things people can remember are to apply pressure and elevate the wound.