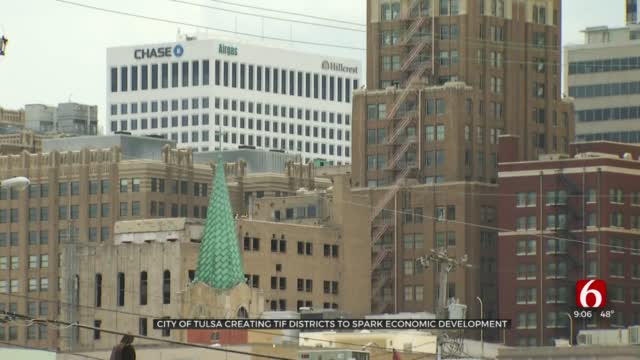 Tulsa’s leaders are working on another strategy to spark development and repairs for the city’s residents.

The plan includes creating tax-increment financing (TIF) districts. City leaders said one of those TIF districts would be centered around the new Peoria-Mohawk Business Park.

They said this would help homeowners in the area revitalize their neighborhoods.

TIF districts are typically used by cities to boost areas with businesses, like downtown or main street regions. Tulsa's Chief of Economic Development Kian Kamas said if approved, a Peoria-Mohawk Business Park TIF district would be geared toward helping homeowners instead.

"The city will have, just over the next few decades, a set of resources to invest in these neighborhoods initiatives around the business park that just hasn't existed to date," Kamas said.

The first phase of their new 250,000 square foot facility is expected to open next spring.

"As a result of that, we've spent the last several months really working on developing what's known as a tax-increment finance district, which allows us to capture the impact of that investment on the surrounding area," Kamas said.

Kamas said they're trying to do something unique and innovative with this district.

In the past, the city has used these options to reinvest and finish projects downtown like The View or the Vast Bank building in Greenwood.

The Peoria Mohawk Business Park TIF district would be focused on helping nearby homeowners by taking the taxes from the businesses and making them available through loans and grants to make repairs.

Kamas said it could bring about $35 million to surrounding neighborhoods over the next few decades. She said the city planning commission will start discussing it this week.

They hope to have the district in place before Muncie finishes construction. That would allow residents to start getting help in two to three years.

Epic Charter Schools’ Board Calls For Due Process After State Audit