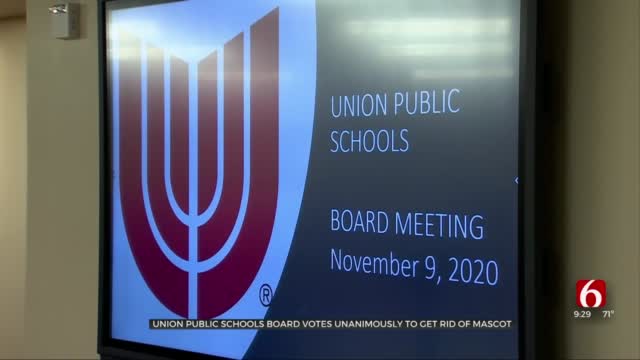 The Union Public Schools Board of Education voted unanimously to remove its "Redskins" mascot and logo.

Dozens of people spoke up at the meeting to express why they think the Redskins mascot and logo is inappropriate.

It's been Union's mascot for 75 years and people in the community have been trying to get it changed for several years. They said, however, that this time is different because much of the pressure to change came from inside the district.

"I love this school. I've been teaching here for 25 years," said teacher Troy Powell. "For me it's an opportunity to step up, step into the next few hundred years of what Union is supposed to be."

The board said the mascot is offensive and a brutal reminder of what Native American people have endured. Now, the district said it will stop using the mascot and then begin a process to remove the logo from all buildings and uniforms.

"I'm so pleased not only from students, but from staff, community - certainly many different tribes - of how respectful everyone has been," said Superintendent Kirt Hartzler.

"I knew the mascot was not good," said parent Walela Knight. "It’s been an ongoing issue since the 60s with the American Indian movement trying to get rid of mascots, because it dehumanizes Native people. It has to change.”

Dr. Hartzler said he hopes to know by January how long it'll take to remove the logo and what it will cost to see it completely gone by August.

There may be plans down the road to find a new mascot, but for now they are simply "Union."

You can read the full statement from Union Public Schools about discontinuing the mascot name below.

Union’s Board of Education voted unanimously this evening to discontinue use of the Redskins mascot and logo, in response to a recommendation made by a 35-member board-appointed committee that was tasked with studying the issue.

“After two months of study, the committee recommended a change, with 88.9 percent voting in favor of dropping the Redskins mascot,” said Superintendent Kirt Hartzler. “Without question, this name is one that has become increasingly divisive. For many, it has been a symbol of pride, honor and tradition. For others, it has caused pain. We received an overwhelming number of requests from Union insiders calling for change. With a name like Union, we can’t hang on to things that cause division.”

“Our committee spent a significant amount of time in discussion and research relating to Union’s mascot,” said Chris Payne, chairman of the committee and Chief Communications Officer for the district. “This decision is not one that was made easily or lightly. Outside of Union circles, the name is widely considered an offensive term. Inside Union, there has also been a significant shift in thinking among alumni, parents and students, and the call for change grew considerably in volume. We knew it was time to revisit this name.”

Union’s Board last considered the mascot issue 17 years ago during the 2002-03 school year. At that time, the Board made the unanimous decision to retain the mascot name. The main reason cited for keeping it was that it was “outside forces” [people outside the district] seeking the change.

“That is no longer the case,” said Payne. “Over the last year, 70 percent of emails we’ve received asking us to drop the mascot have predominately come from inside the Union family. More than 1,200 people – Union alums, parents, teachers and students – joined a group called Union United for Change and signed an online petition. It’s clear that opinions have changed dramatically since the last time this issue was considered.”

Other reasons cited by the committee for dropping the name:

·By dictionary definition, the mascot name is a derogatory term. The word’s origins refer to the scalping of Native Americans and the payment of bounties;

·Union students are frequently put in awkward situations where they are called upon to defend a mascot they personally find offensive;

·Given the diversity of its student population, Union is a “minority majority” district. This mascot no longer aligns with Union’s Core Value of inclusiveness;

·Lost donations/sponsorships from prospective donors who find the name offensive; and

Payne said, “We took a serious look at research related to Native American mascots and the effect on students, both Native and non-Native, and none of it is positive.”

·Increased levels of stress, depression, anxiety and anger, as well as lower self-esteem, community worth and academic aspirations;

·Trauma associated with the name and seeing it celebrated at school, leading to feelings of marginalization, powerlessness and being mocked;

·Harming native students unfamiliar with their cultural identity by giving them stereotypical images to honor instead of helping them find their true ethnic identity; and

·Creating a climate of division at a place where young people should feel they are in a safe and welcoming environment.

“We have been having conversations internally for quite some time about the possibility of making a change,” said Superintendent Hartzler. “Today, I am pleased we have made that decision. I encourage our students, staff, alumni and supporters to get behind it, as it embodies the values Union has always held dear.”

Hartzler said the district will likely take a “pause” before considering another mascot. “I suspect we will just be comfortable being Union for a while. Later, we may consider potential mascots.” He said the district will need time to fully implement the change, as there are uniforms and related imagery associated with the mascot that need to be evaluated. Hartzler expects this would happen by Aug. 1, 2021.