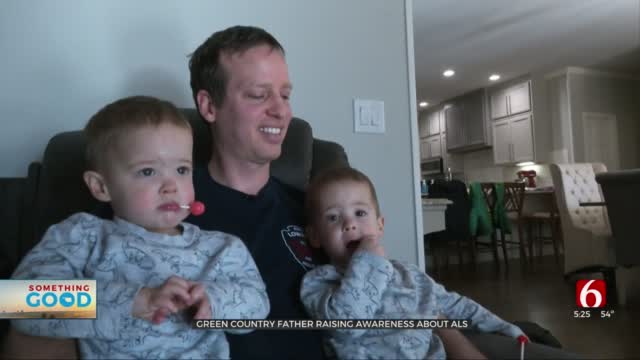 An Oklahoma man dealing with an ALS diagnosis shares his journey in hopes of spreading awareness about the disease.

He spends as much time as possible with his three children, who are all under the age of five. He said he is focused on making something good to come out of the unthinkable.

Life is changing in the blink of an eye at the Watts House. Not only are the kids growing fast, but stairs outside the house are also transforming into wheelchair accessible ramps.

“He is to the point now where he can't safely carry the kids or pick them up for that matter," said Catherine Watts.

Life has gone from hiking adventures and family trips to fighting for extra time to live.

This is the brutal reality of ALS.

Since his diagnosis in May, the family has been as proactive as possible trying to add as much time as they can to their life together.

"Sadly, it is a disease that doesn't have many options. There are only two approved medications. Neither really do a whole lot,” said JR.

JR's wife Catherine has become his caregiver, while also watching their three boys and working a full time job from home.

"I am remaining hopeful that through stem cells or clinical trials or something, we can slow this down," said Catherine.

While JR still has strength, he holds his babies in his arms. While he can still speak, he records his voice. While he can still walk, they are raising awareness for this illness by telling his story and making sure people know what resources and support are available.

"I have always enjoyed life and really soaked it in. I always joke with my friends that I lived more in my 35 years than most people do their whole life," said JR.

When JR is in a wheelchair, the family is going to need a special van to take him to his doctor's appointments. If you would like to help them make that happen, you can donate here.

There are two organizations who have been providing the Watts Family with real support as they face this diagnosis. The couple wanted us to make sure we include those resources here for anyone who might need them: ALS Oklahoma service area, MDA offices in Oklahoma.