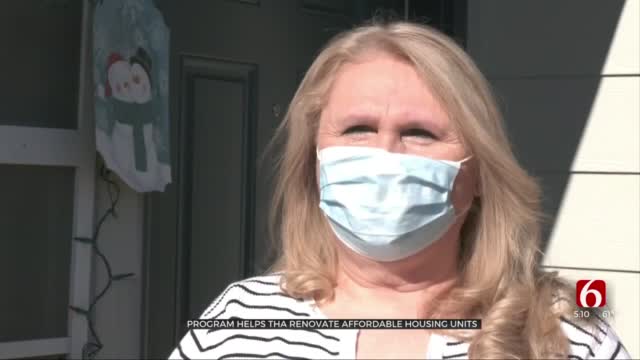 Some Tulsa families are moving into the Tulsa Housing Authority’s newly renovated apartments, made possible as part of a federal program.

The THA moved their first residents into a newly renovated unit at one of their properties. It’s their first property they have renovated through HUD’S Rental Assistance Demonstration.

According to the Tulsa Housing Authority, the work that’s being done at Sandy Park and Apache Manor is the biggest investment into affordable housing the areas have seen in decades.

“Yeah it was definitely a gift,” Jean Baker said.

It was an early Christmas gift for Baker and her eight-year-old granddaughter.

Baker said since 2013, they had been living at the complex through the Tulsa Housing Authority and just last week was given the keys to this newly renovated unit.

“Nothing like having a dishwasher after not having one,” Baker said.

The Tulsa Housing Authority President and CEO, Aaron Darden said it’s been made possible by the Rental Assistance Demonstration, a HUD program, that helps renovate and rehab existing unites.

“The RAD program allows housing authorities to transition from section nine program over to the section eight program, it really is a platform shift in terms of funding,” Darden said.

Darden said they are converting 12 properties in total and both Sandy Park and Apache Manor were ones they viewed as substantial rehabs, with a total investment of approximately $40,000,000.

He said to be able to move in their first residents into one of their properties was a milestone for them.

“To be able to start delivering some of those around Christmas was even better,” Darden said.

Darden said next year they will start converting their other six properties.