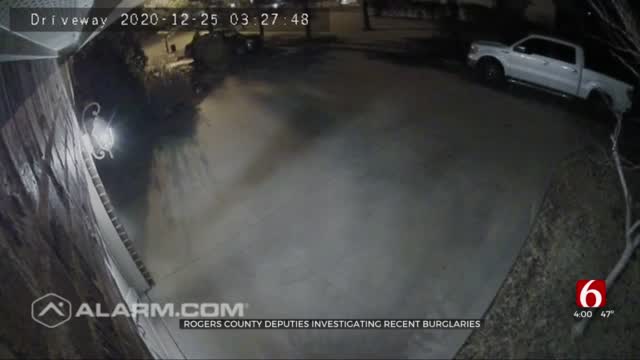 The Rogers County Sheriff’s Office and Owasso Police are investigating a string of car burglaries on the west side of Rogers County.

Sheriff Scott Walton said they Deal with burglary every Christmas - but he said the area where the string of burglaries happened has been targeted a lot this holiday season.

Walton said 5 burglaries have been reported so far in the area of 72nd Street North and 194th East avenue around Stone Canyon.

Surveillance video shows a man investigators believe to be the suspect behind the burglaries over the last several days.

He is also driving an electric blue Ford Mustang.

Walton said this is a good reminder to keep your cars locked, especially is there are valuables inside.

“Every year at this time we see spikes in our residential neighbors and vehicle burglaries, so it’s no mystery and the fact that we see an increase in these type of crimes. Thugs know there are more nice things out there this time of year wrapped as gifts so we certainly want to urge people — when a shed home or vehicles been tampered with —by all means report that,” Walton told News on 6.

If you have any information that could help investigators, call the Rogers County tip line 918-341-3620.