TU Professor Breaks Down Historical Significance Of US Capitol Riot 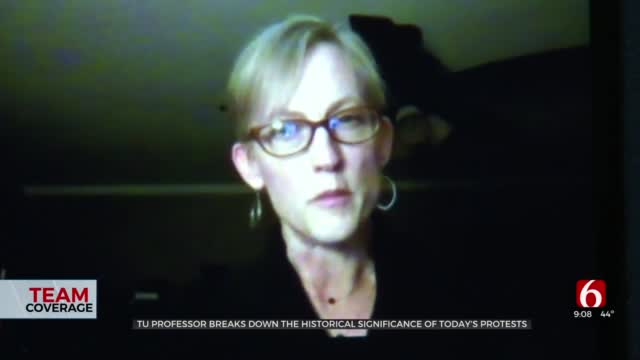 As the world watched the chaos at the U.S. Capitol, historians are analyzing its significance in American history.

A University of Tulsa history professor said our country's founders feared what she calls a “mob-ocracy,” which is why they created the Constitution and checks and balances.

TU students will back in class Jan. 19 and Dr. Kristen Oertel, chair of TU’s history department, is already updating the syllabus to include Wednesday’s protests. Oertel said she was first inspired by the civil debate in the Senate, then she was horrified at the protests that turned deadly.

"It's going to be an unfortunate pock mark on American democracy and the history of our country,” said Oertel.

Oertel compared this election to the election of 1876 that was contested when electoral votes were in dispute.

As a mother and professor, Oertel said she wants her teenage children and her students to pay attention to this history-making moment.

"Besides the Vietnam War protests in May of 1971, we haven't seen Washington, D.C. under siege in this way,” said Oertel.

Oertel called the protestors' actions 'mob-like' and said she worries what happened in D.C. will negatively impact our country, including more security measures.

"Ideally in a democracy, you trust your citizens to control themselves and to follow law and order,” said Oertel.

Oertel said she encourages Oklahomans to call on our congressional delegates to ensure the safety of the electoral process.

TU Professor Breaks Down Historical Significance Of US Capitol Riot